It’s a trek and a half, out to Swansea, to visit the sole casino remaining in town.  Not long ago, the Aspers Swansea site within the fantastically-but-inaccurately named Salubrious Place closed down after a few years trading, evidently torpedoed by high volume / low spend trade with few serious spenders and a huge site with a huge rent.

The Grosvenor is about as old school as Grosvenor get – not only has it never been turned into a G, but it is one of few sites to still have the old Blue signage. It is also the only Grosvenor / G site I’ve ever seen that doesn’t yet have the loyalty scheme points card working on their slots. It’s located on the High Street, and a very traditional High Street it is, by which I don’t mean a thriving bustle of activity with a butcher, baker and candlestick maker on every corner. It’s more of a faded glory that’s been gutted by out of town megastores and a large mall or two, but for all that the casino is handily five minutes from the train station. In my world Swansea is most famous for being the home of the tremendous movie “Twin Town”, and aficionados will immediately know the description of Swansea I’m thinking of – and it’s not the “Graveyard of Ambition” Dylan Thomas one, either. I won’t repeat it here, partly because it’s not very complimentary and partly because it’s not accurate, Swansea’s a great place.

As for the casino, it’s an upstairs unit and fairly traditional, but rather well done. It’s a lot bigger than it looks from the outside, and the first contact was with the equal friendliest receptionist I’ve ever met (a tie with Genting Nottingham). She got me set up, and I trudged up the stairs expecting a foetid armpit of a place, to be surprised by a rather pleasant (and very red) casino.

The slots are up to date, the gaming floor has 11 tables, the poker room’s a good size – what more could you ask for ? Well, there’s a restaurant just on the main floor and a rather nice bar, a mah-jong area, and a big screen or two for sport watching. What is doesn’t have is hand soap – in the gents neither of the hand soap automatic dispensers were working. My Mum would have been delighted, and would have surely told them that “the more complicated this technology is, the more there is to go wrong” – true enough in this case, a bottle with a squashy dispenser would have led to a better result I guess.

The feeling going in was surely that as a sole operator in town, there was a chance that this site might not have to try too hard but overall it’s really well presented and a credit to the local management*.

* This review is, I promise, not biased by the fact that their slots paid me out a wedge …. 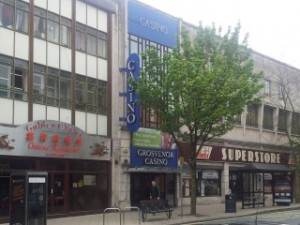