A site in the midst of change during our vist

The Genting site in Nottingham is a curious beast, kind of like a reverse TARDIS – it looks a lot smaller on the inside than you’d expect. The site is located in a largish leisure complex called the Corner House – only a stone’s throw from the Alea – with the development containing restaurants, bars and a big old cinema.

When you get to the casino in the basement, past the friendliest casino receptionist in the UK (now tied with the one at the Swansea Grosvenor), it’s much, much smaller than you expect. To be fair they seem to be going through a major change, and apparently have given up some space to other units recently (with works still ongoing) so they perhaps haven’t re-jigged everything to make best use of the space yet – for example they only have 8 tables, but have a seating area almost as big as the gaming floor, all a little odd.  Rest assured we’ll take another look once the work is finished.

As a quiet site – which apparently gets a lot more lively on a weekend, with a student invasion – atmosphere is key. They have some staff with personality too, my blackjack dealer was a gregarious type, with his shirt open a couple of buttons and with a chest thatch that looked like a small dog stuffed down the front. Can’t argue with this interaction skills mind, although the line between friendly and irritating was in danger of being crossed by his inspector’s singing “skills”.

The slots offer is solid, with a blend of old and new, quit pleasantly sited. We’ll take another look at the Genting once the works are over and let you know how it’s looking. 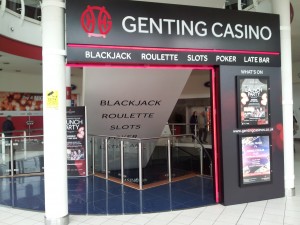