When you ask the average person in the street about UK casinos, many of them with think about the James Bond dinner jacketed super rich geezer, throwing tens of thousands around and generally not behaving like someone you might see in your local G or Genting casino.

Well, as we know, most casinos don’t bear a whole lot of resemblance to this image – on a standard Saturday night outside London – or in fact in the majority of London casinos – you’ll see a lot of beer being drunk, a lot of £5 bets on Blackjack, and some whopping and hollering if someone hits £2 on a straight up on roulette.

However, there is a world where the stereotype looks a bit more realistic.  At the top of the tree, the stratospheric reaches of the world’s casinos, you’ll find the “Big six” casinos in Mayfair, London (although one is outside Mayfair, they’re all generally referred to as Mayfair), where the level of play measures up to pretty much anything you’ll see anywhere in the world. It’s no exaggeration to say that the bigger players in Mayfair are capable of winning and losing millions in a session, and given that these sites are iconic legends in the industry, these whales travel from all over the world to visit. 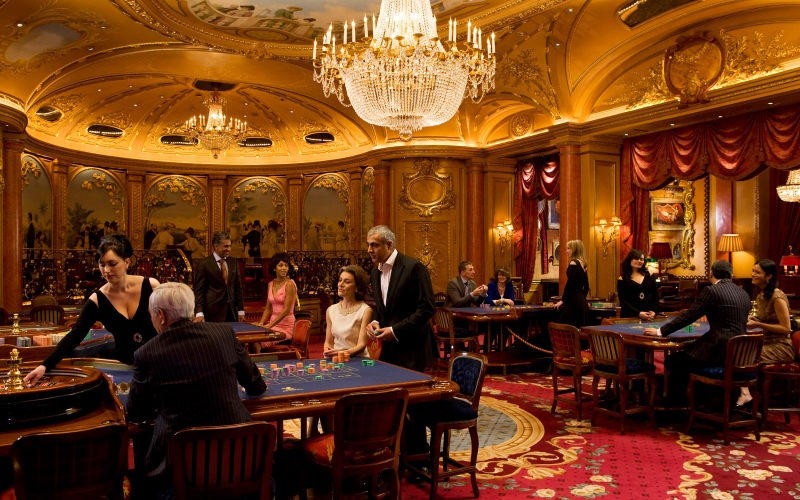 A shot from inside The Ritz Club. Probably fair to say it looks pretty Ritzy …

The six casinos are The Ritz Club, The Clermont, Les Ambassadeurs, Crown Aspinalls, Crockfords and Maxims. The last two are owned by Genting (and in fact Maxims is in Kensington rather than Mayfair), but all six are historic, awe inspiring sites to the casino enthusiast. There’s no way I could ever afford to play at them – in fact in most cases I’d struggle to get through the door – but just for you guys, I’m working on securing access to take a peek around and report back on just what goes on within.

I’ve been to most of these sites over the years, before I got involved with UKCC, and the first thing to say is that the atmosphere is totally different to what you’ll find in any other casino in the world (except similar top end operations or VIP rooms).  There’s very rarely any noise, with the gaming going on in a hypnotic semi-silence – with serious money floating about, there’s a certain respect that goes with the gaming environment.

You also tend to find that the staff are a bit of a different breed.  In addition to the ability to tolerate some poor player behaviour (just because it’s mostly quiet doesn’t mean that people don’t get upset when they lose occasionally) you will also generally see them perfectly turned out – none of the half shaven, name badge missing rabble that I see on a daily basis in other sites. It’s also fair to say that generally – well – they’re the beautiful people. The female staff in particular seem to contain a higher proportion of model quality individuals than the average site, I couldn’t possibly say if it’s part of the staff selection process, but I can well imagine it helps to attract these huge players.

So just how big is the action at the top end?   Well, it would be inappropriate to quote numbers and people as such, but looking at recent press articles is revealing, with the Phil Ivey taking Crockfords to court over over the £7M he “won”, and the Ritz Club customer – Nora Al-Daher – arguing over a £2m loss in one night, which came after substantial losses elsewhere.

Talking of The Ritz Club, I’m delighted to be able to say they’re the first of the Big Six that I’ve been able to take a tour around, and I’ll be posting the review in the coming week or so. Spoiler – it’s awesome !