The G casino is located a rioter’s stone’s throw from Leicester Square, home of The Hippodrome Casino, The Empire and Napoleon’s London venue. It used to be the party friendly Hard Rock Casino until the management figured they were better off stuffing it with gaming, painting it red and hoovering up the Chinese market, and these days it looks like it’s pretty busy, day and night, with a mixture of nearby Chinatown denizens, tourists and just about everyone else.

It’s a lovely old building, with lots of what appear to be original features still around, presumably due to listing concerns. It can be a bit mystical to get around, with the two main levels joined by a staircase that incorporates the toilets. On the bottom floor is the table gaming, while above – and on a sort of in-between level – are the slots and electronic roulette, all of which appears to be state of the art, with TITO (Ticket in Ticket Out) technology – not that I ever got much of a chance to try the Ticket Out part of that. Cash goes in, go to ATM for more, repeat until poor, more like.

The place takes on a different atmosphere on a Saturday night, with party people still in evidence, and a particularly appealing “poker in the pit” table – basically a cash game for drunk morons, and people who can bear to listen to drunk morons for profit. No ordinary human can stick it for more than a couple of hours, though, so it’s Ipod or fisticuffs.

They run the usual membership system with their Play Points loyalty card – no doubt with an extra kick to fight off the new competition in Leicester Square – and the whole place is done with typical Grosvenor elan. As a slot player the environment is just about perfect – an elevated position, regular and enthusiastic drinks servers, and a bit of atmosphere without being wedged in. If only those machines paid me out … 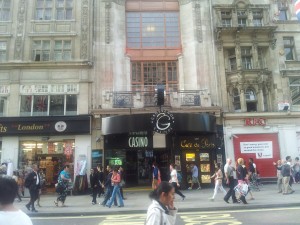