A must see casino in a can't miss location

The Empire is, essentially, the big dog. It’s been around for a few years now, in a truly prime position right on the north side of Leicester Square, sharing the building with the Empire cinema.

What not everyone realises is that it’s actually two licences in one – if you look as you enter, there’s an area with a separate staircase off the reception area which is walled off with a glass partition, and contains a bunch of slot machines and the poker room. It’s all about getting an extra 20 slots in a phenomenal location, in fact it’s generally accepted that it’s probably the second busiest casino in the UK (after Aspers Stratford) – although with no membership and a “walk in” policy, it’s hard to tell for sure. Incidentally, if you are thinking of parking nearby, you most probably have enough money to buy your own casino, it’s not really an option.  Have you never heard of the tube ?

Once you head inside the main casino, you’ll see a large gaming area, split onto two levels. Recently they’ve redesignated an area upstairs into the Carlsberg bar, which is set up for watching sport, and a very pleasant spot it is too, with hi-def feeds from a huge variety of international sports channels, much more than just the regulation Sky options. There’s a restaurant up there too, plus the slots that belong to the main licence.

The main gaming area is downstairs, along with the other bar. The prices are a little stiff on the tables, with £10 and £15 Blackjack much in evidence, although if you want to play roulette for a bargain, hit the “Multiplay” automatic roulette table – it’s kind of a cross between real roulette and an electronic table.

On a Sunday, Monday or Tuesday in particular you get a clearer idea of how the whole place makes a living – the Chinese action on about 9 Punto Banco tables is phenomenal. You’ll see a seething mass of players, and sometimes some serious money changing hands. It’s a sight worth seeing in itself.

The best thing about the Empire, however – and I don’t really want to tell you, since it’s almost a little hidey hole just for me, levels of business-wise – is the upstairs “Icon” bar. A discreet-ish entrance leads up to the bar overlooking the whole of Leicester Square, and if the above-noted seething mass of humanity was what you came to see, the view is perfect for people-watching. It won’t be the finest aristocracy out there on a Saturday night, mind – generally the most fun is watching the most blitzed human beings in Britain try to navigate lampposts, pickpockets and pavement pizzas – but at least you’re removed from them.  Take an airgun for added entertainment. Especially if you’ve always wanted to see a police helicopter …. 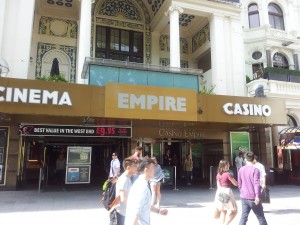