Beautiful ultra top end casino, not for the likes of us, mind

The first of the “Big Six” casinos in Mayfair we have had a chance to take a look around – courtesy of the kind invitation of the management – is The Ritz Club, London. If you’ve spent any time at all in London you’ll almost certainly have heard about it, it can be found in the former ballroom of The Ritz hotel on Piccadilly, more or less right next to Green Park tube station.

Getting into a casino as exclusive as The Ritz Club most certainly isn’t a question of wandering into reception, ID in hand – the door staff will politely explain that it’s a genuine members only situation. In this context, being a member means, effectively, being brought in for your first visit by another member, or otherwise being referred by someone the management at The Ritz Club know and trust. Actually The Ritz Club is a little different from some of the other London top end casinos in that they also allow hotel residents to use the casino – although this privilege is closely monitored.

When you enter the Club, you can very much see why. As you move down the staircase, to the reception area, you already you get a clear idea of the majesty of the place. The atmosphere is quiet but alive, and the smartly dressed (for the most part) clientele are generally in serious mood, served in the main by staff that seem to be almost exclusively model-quality women. I visited the very day they’d put up their Christmas decorations, and style was very much in evidence. It’s a magnificent setting for a gaming club, with artworks, spectacular ceilings and antique mirrors very much the order of the day, and some beautifully done festive touches.

It’s actually quite large, given that the numbers through the door will be tiny compared to a less exclusive venue. Comprising of a number of salons, the main area begins with the restaurant at one end which leads into the bar / lounge, then follows into a few separate gaming areas (which are or can be made private) to the main gaming floor itself as you walk through.

The main floor is a magnificent room, originally the ballroom of the Hotel, with some very smartly dressed staff and gorgeous Abbiati (generally considered the Rolls Royce of gaming) tables, all of which are polished to a blinding sheen. There’s a raised area with a Baccarat table, which evidently used to be the bandstand. As usual at the very top end, there’s a unique atmosphere to the gaming – overt displays of emotion at the tables aren’t really the way of things here – and with the sums of money that can change hands, that’s not surprising. It’s a bit of a different world at this level – while it would be inappropriate to discuss individuals, it’s fair to say that there will be players in this and the other top end casinos capable of winning and losing millions in a session.

There’s an upstairs area too, with a rather unique offer, a cigar room.  Evidently it is legally classed as a cigar shop, meaning that customers are allowed to smoke their cigars on the premises, and judging by the smell of the room – I’m not a cigar smoker but the flavours were pretty intoxicating – the room is well used.  Next to that is the “outdoor” smoking terrace – a must have at this end of the market.  It’s beautifully done, as are all elements of this classic London casino.

It’s a fascinating glimpse into a world not many people have a chance to view, and UKCC would like to thank Roger Marris for the opportunity to take a look around.  If you would like to visit and play, you will need to make arrangements in advance, the easiest way being a reference from another member or upmarket casino. 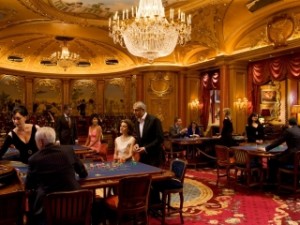