Throwback site with a tough competition

The Grosvenor Stoke is indeed a curious beast. It’s the last Grosvenor casino they put together before they started with the “G”brand, and it really does look rather dated these days, with plenty of neon, bright colours and a general feel of the noughties or even the nineties.

It is located next to a Mecca (same company) bingo club, on a pretty grim retail estate just outside the centre of Stoke. The first thing you get is a stinking hot reception area, full of apparently random crap lying about, which I think is available for your loyalty points.

Once inside, the 1990’s hits just keep coming, with a minging carpet and, overall, a pretty smallish site. The slots are as up to date as you would expect, pretty much right there as you enter, and the usual suspects are present with a fairly nice looking bar, a small restaurant and poker room, and the gaming tables which were just getting going as we arrived.

One gets the feeling that this site was chugging along nicely until the new Genting opened, just up the road, which may have micturated on their potato-based foodstuff somewhat. 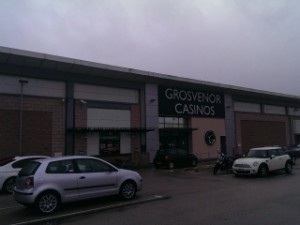