The Rainbow in Bristol is right in the middle of the action, facing onto Millenium Square. It’s made up of two levels, ground and fourth, with seemingly a gym in between them. The ground floor evidently used to house an extra licence and a bar, although it’s disused now and only houses the reception area. There are all kinds of other leisure units around the area as well, including a rather sad closed down branch of Hooters.

From there you’ll be getting the lift up to floor four where the main meat of the place is found. If you’ve ever been to Gala Sunderland the fitout is eerily similar, although this site is considerably bigger. It’s a pleasant enough environment, with absolutely squadrons of Electronic Roulette around the place, all bang up to date kit too. It’s great to see 5p ER around, which given how much capacity they have makes sense to cater for all levels, although I could not for the life of me understand why the maximum on a single number on these 5p terminals was £5 – even bookies let you go bigger than that!

The slots offer is also fully up to date too, as you would expect form a casino with a large-ish Grosvenor within 300 yards. The card room space is also very impressive, with a unique-ish arrangement as they have a very large tournament room as well as a cash game room. It transpires that the cash game room used to be the “Coral Lounge” – some signage is still around – until the local operators realised that having dedicated cash game poker area would be a good idea, so they hijacked it from the original sports / betting concept and offer rake free games early, to get things rolling, then start charging. It looks a busy proposition.

There’s a restaurant at one end, all very nice looking, and the optimistically named “Epernay Champagne Bar” – I’ll bet everything I own at any odds you like that they sell 10 times more lager than champers. Being a huge site, though, there’s plenty of space everywhere, and lots of comfy seating areas. They also have space for a private gaming area, cordoned off by an extraordinary shower curtain type of arrangement – looks to me like it doesn’t get a lot of action. There’s also the umpteenth customer service desk I’ve seen in UK casinos, and yet to see one with any staff behind it. 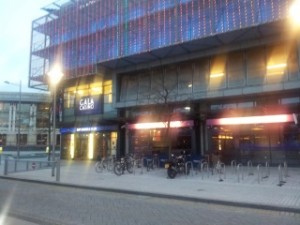