Independent site with lots to love

The Palace Casino, located off the almost-but-not-quite-amusingly-named street called “The Conge” is an independently owned operation, which butts up against a bingo club of the same name. It’s pretty much in the centre of Great Yarmouth, and most probably is a pretty lively spot of a weekend – certainly it’s the only casino I’ve ever known in the UK that has tried open access and then moved back to a membership only system. This also has some unfortunate repercussions in terms of wait time – I showed up at about 7.30pm, just as the poker crowd were coming in, and of course they were all desperate to get through reception – this meant filling in my form and getting it on their computer took over ten minutes. Tedious.

Once you eventually get inside, it’s really a very nice casino. The lighting is well done, and with the tables in the centre and the slots (all older single game IGT jobs) along the wall, it feels like a relaxing spot for a punt. The atmosphere isn’t helped (in my opinion – other opinions are available) by the staff in very traditional black trousers, white shirts and black bow ties, but some people prefer that – and the staff are a friendly bunch.

It’s very thinly staffed – it’s been a long old while since I’ve seen a casino where you ring a bell at the cash desk to get a cashier, and lo and behold one of the inspectors walks out of the pit to serve you. That’s generally considered a huge security risk in casinos, partly for the visibility from a robbery perspective, and partly as you don’t want gaming staff who have easy access to the chip floats to be able to get into the cash desk and exchange them unseen, but then I don’t think this site has too much regard for security – the staff even have trouser pockets, which is right at the top of the list of no-nos for most operators.

It seems like the Palace does good business from the internet too, they have tables linked to internet games so people can play “live” on their computers, with one of the Blackjack tables even having boxes just for internet players, which feels a bit odd. It also means there was a huge pile of unsafe looking electronics piled up under one of the roulette tables, all a bit ropey looking. Spill a pint there and you’ll need Accident Direct on speeddial.

There’s a busy-ish poker room off the main floor, and a restaurant upstairs, although when I went up there at prime dining time – around 8pm – there didn’t appear to be any staff from whom I could grab a menu. Tuna mayo sarnie from the garage on the way home it was, then ! 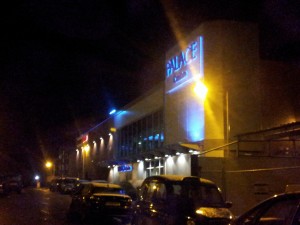