The Grosvenor in Northampton is pretty conveniently located on Regent Street, with a huge car park, albeit one that’s not that easy to access – it’s a bit round the back and round the corner type of thing. There’s also what appears to be a company limo parked in the car park, not sure what that’s all about.

Once you get organised, you can see it’s a pretty old looking building – perhaps they’d call it classical urban architecture – I’d probably go with 70’s box style. Inside there’s the friendliest receptionist you could ask for, and the usual tedious signup process. From there the restaurant / bar is on the ground floor and the gaming and second bar upstairs, although there’s another staircase between the two.

The gaming floor itself is a bit of a riot of styles – I reckon you could put the carpet (goldish) in a cage fighting the wallpaper (a kind of rusty colour) to find a winner, which would then have to fight the traditional green table baizes in a colour clash deathmatch.  Suffice to say, even a sartorially challenged individual like myself found it a little bit mindbending in terms of colours.  On the gaming itself they are pretty well set up, with 20 decent slots, albeit still on coin payouts at time of reviewing (when it was, in fact, still a Gala casino). I guess with multi game IGT machines among the offerings, you have the option to change games without moving and the faff of pumping out your credits in coins and re-plugging them into another box, but it’s still a pain, which no doubt will be rectified now Grosvenor have taken over.

It’s a really big site, made to look bigger with mirrored columns everywhere, and it’s pretty comfy due to all the little hidey-holes around the floor, including a rather comfy bar area (with steak baguettes that come recommended).  Once you’re past the receptionist, the rest of the team seemed a bit grumpy, perhaps there’s not enough on a Thursday afternoon in Northampton to get the pulses racing. I can kind of see where they’d be coming from, to be honest.

There’s some other shiny kit, with three different types of electronic roulette to choose from including some new Sabre terminals, and the gaming tables have some funky personal armrests on them too.  Now that the other old Gala in Northampton, in the miserable Sol Central leisure development / disaster has closed, this is your town centre casino option. 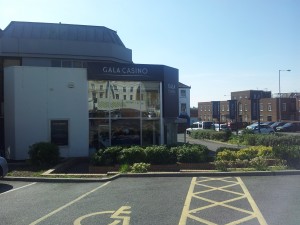