Classy casino in the Grosvenor stable with a hideous neighbour

The Park Tower is in Knightsbridge, a stone’s throw (if you’re feeling vandalistic) from Harrods. As the photo shows, it sits beneath possibly the most hideous hotel on the planet, which looks like an enormous dog hairbrush.

It’s a classy spot, mind, part of Rank’s estate (same people who operate G and Grosvenor) and is their highest end casino these days. It shows too, with a very subdued atmosphere and barely audible music – probably not the place to take your office party. It’s all very tastefully fitted out, with lovely split level gaming tables and classical green baize, although there seems to be a design based brainfart in one corner, with a truly minging mirrored column.

The old fashioned theme runs through, with high chairs for the inspectors and a little bell they ring to get a valet to come over to serve drinks. The level of gaming is suitably large too, with one gent I saw cashing out a couple of grand – and that was from about 6 punters in total.  I settled on the electronic  roulette, which was in fact extremely old TCS kit – so old the roulette numbers had burned themselves onto the screen.  They’d also not calibrated the screen properly, so to bet on 16, for example, you had to touch 13 – infuriating, and not great attention to detail.   That’s pretty harsh when the minimum is £1, and you can tell they’re serious when the only other two options are £10 per chip or £100 !

However, I imagine the tables are what drives the place – they certainly don’t prioritise slots, with only three in evidence, in the bar. By all accounts the restaurant is excellent here as well, although again you’d be advised to dress up a little.  I showed up in jeans and a jumper, and while they were perfectly pleasant and let me in with no issues, I didn’t feel particularly comfortable. Overall, I don’t think I’m really in the target market for the Park Tower, but if you’re a bit of a high roller and want service to match, take a look. 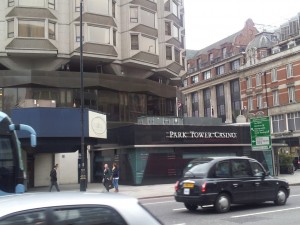