Odd site over near the Natural History museum

The Cromwell mint is located literally opposite the Natural History Museum, and to be honest elements of it probably belong there. Genting, the owners of the site, haven’t really tried to keep it up to date in terms of décor.

It’s nice enough inside, although getting in reminds me a bit of a hall of mirrors, I managed to negotiate it without faceplanting any of the glass panels however. Once you’re through the reception area, there are three options. On your left is the poker room, which extends a bit further than you see at first, and straight ahead are the stairs down to the gaming floor, more of which later.

On the right, however, is the Silver Room, and what an odd place it is. It’s full of electronic gaming options, with roulette machines and slots, and has a peculiarly cold atmosphere. This is also the only site I’ve ever seen in the UK with no IGT machines at all – they have 8 bookie style FOBT machines and the rest are Gaminators, quite an unusual mix. Presumably it’s a bit of an experiment, as is the room as whole – it certainly didn’t seem very busy when I visited. There are also the saddest looking chairs and a token table in the middle of the room. One imagines at some point during their 24 hour opening cycle it gets busy, otherwise they’d no doubt change it all up.

Heading downstairs onto the main floor, it’s very much a mix of styles. Oddly enough the carpet looks pretty new, with a pattern that randomly reminded me of Fisherman’s Friends (the insanely hot sweet things) while the ceiling is an ages old lattice type design. The tables are strung out along what initially looks like a long thin design, until you get to the end and find the whole thing wraps around into another gaming area. The back side has some electronic roulette, which is run in eerie silence, and eventually becomes the restaurant. When I visited there were what looked like about 5 management in the restaurant, working very hard while managing to disguise the hard work by drinking cups of tea and holding conversations about football.  Masters of misdirection, these managers. Maybe while they were meeting they could have talked about the entrance to the staff area, just off the gaming floor, which seemed to be an open doorway into an area that had, to say the least, not been taken care of in the same way as the public areas.

There are some nice touches, not least a PA system playing excellent music on the day, and a nice touch in the way they showed the roulette results in the downstairs electronic area on dedicated screens. Tough to argue with a spot that sells Haagen Dazs ice cream too, and I was also randomly taken by the male staff’s belts, which bear the Genting logo.

Overall it’s a pleasant enough environment, and along with the Gloucester casino, is the only option out there in West London. Most of the other London Casino venues are found between Mayfair and Leicester Square. 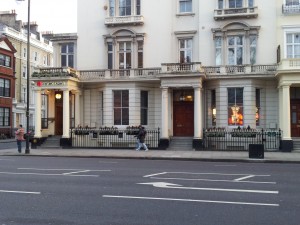