The UK's biggest and busiest casino, this one has to be seen

Now this one really is the one club to rule them all. The first of the new types of casino licence to be operating under the 2005 Gambling Act – they were splashed across the papers as “Supercasinos” – although this is as close as you’ll get to Vegas style in the UK.  Situated in the huge Westfield shopping centre in Stratford (as in East London, not as in Shakespeare) right next to the Olympic park, it is as well connected as you might expect, having been the centre of the world’s attention for a fortnight in 2012. There’s a bus station, tube station and rail access, as well as being a few minutes off the North Circular London ring road – although don’t mess about with the 20mph speed limit on the approach roads, they aren’t joking.

It’s not 100% obvious how to find it within the shopping centre, although reading the copious signs properly does indeed help – it’s on one of the upper floors, next to the (ludicrously well fitted out) cinema.  There are actually several entrances, one direct from the car park, but the main one is an escalator from the level below.

Once you head inside, it’s a huge site, which has got a lot bigger in the last few months with an area absorbed into the casino to enlarge the humungous poker room.  From the main entrance it’s a bit of a long thin type of site – at the entrance end are the cash desk, restaurant and Sky Bar (a great spot with a view of the Olympic stadium which is a cross between a bar and, late at night, a club) and then as you go through you hit the tables and the slots. Talking of slots, these new 2005 Act sites are allowed 150, and they take full advantage here at Aspers, with a huge variety of everything you’ve ever seen, heard of or hoped for, a great offer.  They’re also stuffed full of Electronic Roulette, Punto, Blackjack and even a Dice option, which is always good fun.

As you head through towards the back of the site, you get to the other main bar, along with a huuuuuge tv screen tuned to sport – and even dog and horse racing in the daytime. Another benefit of the new type of licence is the fact that they can offer sports betting, and there are some kiosks if you fancy having a dabble while you’re there.  Finally at this end of the casino there’s the aforementioned poker room.

Overall it’s an amazing site, ludicrously busy and quite – shall we say – vibrant on a Saturday night.  You’re never too far from a West Ham shirt in the building, and there are seemingly hundreds of staff – our last visit was in the morning, with the cleaners buzzing around – not sure why, as the place was spotless already. They have so many of the details right as well – the multimedia screens around the casino were showing all the various promotions, and once their prize draw came up on the screens, the PA switched to a guy talking about the draw and how it worked and so on – you’d think it’d be standard for a casino to integrate things like this, but it’s the first time I’ve seen it done this well.

If you’re into visiting casinos in the UK, you have to take a look at the Aspers site, it’s the first of the new licences and is a genuine leap forward. 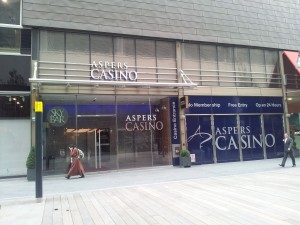