Small back street spot that's recently been tidied up

The Grosvenor in Hull, is located pretty centrally, although it’s in a bit of a back street and is blink-and-you’ll-miss-it small. I must admit I had been there years ago, and was readying words like “filthy pit”, and “scrofulous hovel” – it used to be a bit grim – but it’s been tidied up a lot since my last visit and now falls into the “small but nicely formed” bracket.

A very friendly receptionist didn’t seem to mind that I interrupted her having a crafty fag outside – I suppose I was helping her to quit – and soon had me signed in and wandering around. The initial wander doesn’t take very long, it at first appears like the smallest, squarest casino in the UK (with an honourable mention for squareness going to Grosvenor Huddersfield) until you see a little “tail” headed out the back, taking in the card room and bar. In fact, if you looked at the site from above, it would look a bit like a child’s handwritten lower case letter “q”.

With a site this sized, there aren’t many layout options so predictably the tables are in the middle and the slots around the edge, although they do have the Electronic Roulette lined up just off the wall, so as a punter you sit with your back to the wall facing the gaming, which is a lot more comfortable.

The bar is pretty small and the card room too, and the poker also features a “women only” game – not sure how legal that is, to be honest. It’s got your classic old lattice style ceiling – regular readers know how much I love an old fashioned casino ceiling – and some other classic touches, like coin payout on the slots and mirrored columns, the latter of which isn’t fooling anyone. We can see it’s a small site, your amateur interior decorating touches won’t fool us!

It seems a friendly place, as befits a smallish town centre site, and although it’s a bit short on atmosphere when it’s empty, it looks a whole lot better than it used to. At the time of reviewing they had properly mixed branding – for example Gala signage outside, but Grosvenor name badges – so once it’s fully Grosvenor-ised I’ll get back in there and update this review. 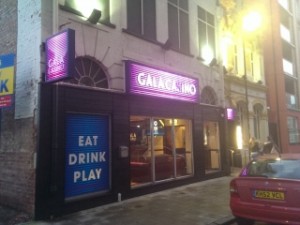