The Grosvenor in Stockport is a tricky chap to find, being about 200 yards past where my Satnav told me the postcode would be located. Once you get there it doesn’t look much from the outside – the word “shed” kind of leapt to mind at first – but appearances can be deceiving. It’ll no doubt soon get a facelift anyway, with the Grosvenor takeover.

Once through reception – which was dark enough that I actually thought the place was closed (opens at noon, tables at 2), I wandered inside. It’s actually a lot nicer (and bigger) inside than you’d think, stretching away in front of you. The slots area is right there as you enter, with a mixture of older slots and some new (presumably Grosvenor-supplied) multi game IGT boxes. One of the slots was out of order, something you very seldom see in a Grosvenor site. Sitting playing away on one of them, I also noticed a rat’s nest of cables behind the machines – feels like one dropped pint and you’re problems are over, at least in this world. Anyway, the gaming floor is straight ahead, with the Electronic Roulette and cash desk at the end. The bar runs along the left hand side, slightly raised and actually a really nice area for watching the gaming or the TV, and I think some of it doubles up as the restaurant area. There are also a couple of tables on the raised level at the far end, presumably a bit of a VIP area.

There are a few nice touches about the place, and the décor looks a little more sophisticated than the average Gala Casino. The table layouts are a bit old fashioned, mind – green baize went out with the Ark, surely! There are also some ancient looking Electronic Roulette terminals set into the bar area, overlooking the gaming floor, which look a bit boxy and dated.

They’ve got a really good setup for ER in general, mind, with 4 big plasma / LED screens showing the wheels, and backlit in the same colour as the wheel concerned. Simply put, this means if you’re playing on the wheel marked “Purple” on the ER terminal, just look at the big screen that’s on the purple wall panel to assess your fate – simple.

There are some typical Gala promotions too – free breakfast after 1am for players, and a fantastically crappy offer with a stampcard that gets you a £5 F&B voucher after 4 visits. Open invite to local tramps I would think, but then a free burger or pint never goes amiss. All things considered it’s not the most salubrious of sites, but serviceable and a good spot for taking in a footie match while watching the table gaming or having a tickle on the electronic roulette. We’ll stop by again now that it’s part of the Grosvenor estate. 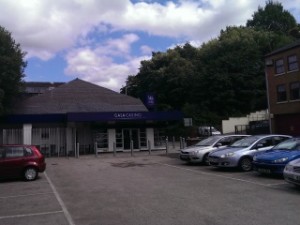