Small site with a bit of character, and a lot of pumpkins.

The casino offer in Plymouth is quite an odd one – both casinos are within 50 yards of each other, on opposite sides of the road. If casinos could fight, the Genting would lose – it’s far, far smaller than the G opposite, but not without charms.

The first experience isn’t a particularly promising one, as they have controlled doors to “buzz” you in – not many casinos in the UK still have that precaution, in fact the only one I can think of is Genting Bristol. Anyway, once you’re into reception, for me at least it was the start of a genuinely tedious process to get me signed up.  You would think that in the 21st century, a computer database would be sophisticated enough that they could find me and my membership of other Genting casinos (given I’m a member of … ooh … all of them) verify the picture (or imagine the picture with an extra 15 pounds of weight added on) and sign me up.  Oh no, not in this case.  The extraordinarily barnetted reception gent had to phone up another Genting casino to verify my identity, thus essentially stealing five minutes of my life.

Anyway, tedium over, I headed up the stairs to the floor. During October there’s a national Halloween promotion (“Hallowin” – oh dear) and this site really had gone to town, with pumpkin and bat based craperphanalia all over the place, carpet-bombing style.  I bet there’s one guy (or girl) who works there who absolutely loves it – the type of person who wants the Xmas music CD on from December 1st – you know, the sort of person for whom flamethrowers were designed.

So, getting back to the point of the review, the main floor is pretty modest in size, but rather well decorated. I plonked myself down in the corner on the slots, and watched the Plymouth casino world go by. There were a few people about, so my miserable losing run on the slot didn’t depress me too much, but as it was getting expensive I took a wander, very nearly getting taken out by a cable on the floor encased in a rubber housing – I thought all casinos these days had raised floors so they don’t need these sort of anti-personnel man traps …

The Electronic Roulette system is one of the oldest I’ve ever seen, with the hardest-to-find cashout button imaginable – these guys aren’t stupid.  There are also some screens showing the wheels for ER players, although for many of the terminals you’d need binoculars to see the actual ball drop. They also, amazingly given the size of the site, have two of their loyalty card kiosks, where you can check your points and get special offers and so on. Why they have two in a site this size is a mystery to me, they’re almost close enough that you could touch them both at once. But hey, what do I know.

There is a poker room, but with that night’s tournament enticing a total of 12 runners, is seemed unlikely to be a night where millionaires were made and dreams were to come true. However, it’s a perfectly pleasant site, so drop in and take a look around. Especially if you like Slade. 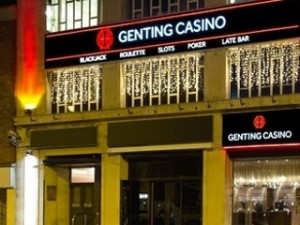