Luxurious and handy, with an interesting local aroma

Ah, Coventry. Centre of the country, home to … well … nothing in particular, as far as I know, other than the imminently doomed Coventry City Football Club.

Anyway, in casino terms there are two denizens, the aforementioned footie club complex being home to one, while the Genting is the other. It’s located as part of the “Skydome” leisure unit. Now, I don’t want to be picky, but the other Skydome I’ve been to (now renamed the Rogers Centre, I believe) is a baseball stadium in Toronto, and this one is a little more …. modest. For all that, it’s well located, being seconds off the Coventry ring road, with its own (very busy) car park as part of the complex. The car park is also notable for its rather odd smell – you expect car parks to smell of exhausts, or occasionally tramp’s piss, but this one rather oddly smells of BO, and I mean the whole car park, quite a trick.

The casino is part of Leisureworld, a name which I think Rank came up with in the mid-90’s, and always makes me think of the communist Eastern Block – “You will attend and enjoyment is mandatory” type of thing. The casino is on the ground floor, and is another of the new breed of Genting sites, which means it’s beautifully fitted out. They have a clever bar arrangement where the bar is two-sided, with one side on the “public” side of the reception control point – you can have a drink without actually entering the casino. Once you’re in it’s all very pleasant, with soft colours and contours. I even found that the ceiling and the carpet matched in terms of the shapes and patterns, and was inordinately pleased to realise this. Perhaps I’m spending a bit too much time in casinos these days. Sitting in the corner and taking it all in my eye also fell upon a beautiful four screen HD display, only to discover it was showing some obscure tennis tournament and not the England cricket test match – surely a disciplinary matter for the manager on duty, are there no patriots any more ?

Talking of staff, I also saw the most bored looking gaming inspector of all time. It was almost as if he’d won a contest to look out of his mind due to the tedium of it all, with pantomime yawns and a face so miserable you’d think he was a rhino in PyongYang zoo who’d been there 40 years. Perhaps a change of career direction beckons – it certainly would if I was his manager.

The kit is as top notch as you would expect, with Sabre electronic roulette and the latest slot varieties, not that they wanted to pay me out anything. The final touch was a large desk just off the pit, with a suited manager-type sat earnestly pretending to work. I suspect multiple Facebook updates, of the “brd at wk pls send Youtube funneez” kind …. 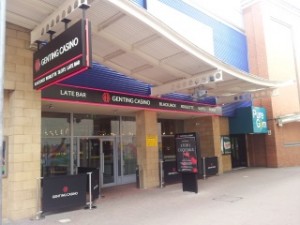