Was a relic, now a chic little spot

We were a little bit mean about the Genting Bolton, as you’ll see in the original review below, but it’s now had a refurbishment inside.

It’s still tiny – it might actually be the smallest casino in the UK, as far as I can tell – but it’s now a lot tidier and in fact is quite charming. The front door is the only negative – I wasn’t even 100% the site was open – but as soon as you enter, the difference is clear.  They’ve re-jigged reception to make it a bit more welcoming, and once you step inside there’s a lot to like.

Some nice exposed brickwork gives the place a bit of character, and plenty of mirrors try (and fail, to be honest) to make the place look bigger. It still only has 8 Electronic Roulette terminals, but now they’re shiny new Sabre machines, not the prehistoric steam powered relics they used to have.

From ugly duckling to new, beautiful … small swan, this is another good example of how Genting can upgrade a casino with real style.

There’s Ying and Yang, matter and anti-matter, and the G and the Genting in Bolton, they couldn’t be much more different. From the outside the Genting actually looks quite grand (despite the Ikon nightclub, direct from the mid-90s, opposite), with a bit of a grand column thing going on at reception and the hint of quality. A hint is about as far as you get, however, on entry, as this is a lot more homely on the inside and feels as comfortable as an old shoe.

It’s all a bit old school here – the airlock type reception with a buzzer through and a button to press to get out belongs to times gone by, and it’s worth taking a look at the ceiling as you walk in – it looks about 8 years old, and has to be the newest thing in the building.

There are 7 tables on site, and when I visited more staff than customers. You know it’s a friendly local place when you hear a (male) punter on roulette having a detailed discussion about the size of the (female) dealer’s arse, putting forward the view that it needs to be half a stone smaller, to be jokingly but firmly rebutted by the dealer and colleagues. Proper banter, and the feeling of a friendly spot was further increased when the manager approached and asked if I wanted a tour, a drink, or anything really. What I really wanted was a win, and they even managed to oblige with that !

The much appreciated winner came from their automated roulette. Now, we’re talking about a serious veteran piece of equipment here, at least ten years old for sure, and as I know well, with such age come … performance issues. Several were offline, I struggled to get some bets on, and the time gap between “Place your bets” finishing and “No more bets” was literally a fraction of a second. Talk about popping off early …. actually that really should be a problem for the slightly younger equipment. Anyway ….

There is an array of very old slots along the wall, so old they pay out in coin (unusual for a Genting site) and don’t even take the loyalty card. Upstairs there’s another bar lounge and the card room, although I didn’t go up as undoubtedly I would have been on my own and come straight back down again. It’s also amusing to see the standard Genting poster about “goCasino”, crapping on about bringing your friends and making a night of it. For all the benefits of a friendly local spot, it’s not really a take-the-partner type of place. Still, they are another shot up old Genting with a Pringles machine, and generally I’ll take a friendly crappy old place over a cold impersonal monster any day. 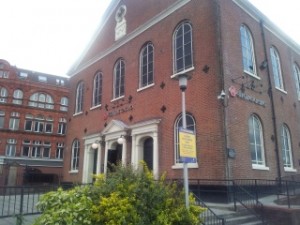