Brand new gaming excitement in an out of town spot - complete with Bingo !

There’s a new player in town …. The G Casino was exactly a week old when I dropped in, and you could still actually smell fresh paint. It’s situated quite a way out of Reading centre, and although it has plenty of parking, such a location can be a bit of a gamble – just ask the Alea in Leeds (closed recently), Star City in Birmingham, or the Isle Of Capri venture in Coventry, where the American owners decided to operate under the Coventry City Football Club stadium, a few miles out of town, and lost (conservatively) £40 Million between fit out and losses in their operational time.

However, if anyone can make it work, Rank can – they have a site in Walsall right on the motorway which runs ok, and they rescued the Coventry debacle (albeit with help from a rent deal) and now trade that profitably.

The new G is quite a sight to behold, being effectively a state of the art version of Rank’s baby. Off the lobby there are two doors, one to the casino and one to the bingo licence within the same building. This is a bit of a masterstroke, as it means they can offer 8 extra £500 jackpot slots as well as a pile of AWPs (pub slots to you and me), and even run real bingo games, linked to loads of other Mecca clubs. Quite fun for a quick shot at a big win, I’d say.

Also off the lobby area is the main dining area, with a rather strange kitchen-decorated area, apparently designed for casual eating and meetings and so on.

The real meat comes inside the gaming area, however. The tables area isn’t huge, but directly off it are the fabulous bar, a games lounge with a huuuuuge TV for sport, Xbox type stuff, and best of all retro arcade games. I say retro, in my opinion, being of a certain age, Missile Command and Defender rank among the best video games ever made, and put Call of Duty and co to shame – although I accept I may be in a minority of one.

The poker room is a good size and has its own bar, a bit of a masterstroke I’d say, and the site has its own show bar with 120 seats. This is a bit of a gamble for sure, but the space is presumably cheap outside the town centre, and the space can be flexible for poker or other events.

The slots area is as up to date as you would expect for a casino that’s only a week old, and there appeared to be a handful of unfamiliar machines on trial as well as the usual IGTs and Gaminators, not to mention a “Pinball Roulette” terminal.

Finally, this is the first casino I’ve seen that has gone away from nice shiny pens for punter to the stumpy equivalent of bookie shop pens. If everyone does that, disaster for me, I’ll have to buy pens like anyone else …. 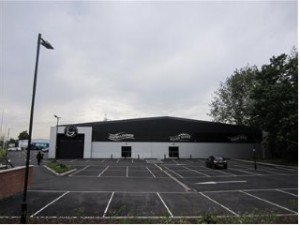