The first thing to say is that this review contains the greatest ever UK casino fact, but you’ll have to wait until the end. No cheating.

Given the nature of the nearby Napoleon’s in Leeds, first expectations of the Bradford edition were of something a little old fashioned, perhaps in a more weathered building. However, on turning the corner to see the Bradford site it appears to be a relatively new building – at least from the side it looks like a concrete block, although it has either the original façade or a suitable replacement. It also has a rather odd sign with an image of Napoleon on top of a vertical strip of red neon, looking like nothing so much as Napoleon-on-a-stick – probably not a great idea for a new confectionery brand.

Inside it’s very much business as usual for the northern based operator, with dark woods, plenty of red carpet and light fixtures that take you back to the seventies. As with their other sites, there’s a very nice looking (downstairs) restaurant – in fact it’s officially “Napoleon’s Casino and Restaurant”, so they clearly are keen to emphasise their culinary offer, and seem to do well out of it, with perhaps a slightly older clientele. They even have the menu on display for three months’ worth, with a change each month, and a cracking deal for two meals plus a bottle of wine for £20.

The staff are in black and white, with the dawn of the 21st Century perhaps grudgingly reflected by a spotty straight tie rather than a black bow tie. The slots are a mix, with a handful of IGT multigame boxes, and a good ration (6, I think) of “B2” machines, identical to the ones you find in betting shops, which were pretty well played. The usual array of table games can be found as well, and you won’t need me to tell me the tables baizes are … traditional green.

It seems a pretty busy site, and is really a rather pleasant atmosphere. Monthly cabaret acts no doubt fill the place (and restaurant).

But what of this awesome fact? Well, the most stupendous thing I’ve ever seen in a UK casino, and I’m still not quite sure what to make of it, is that …..

Not just one type, either, there are about 8 different flavours (or whatever you call different types of snuff) behind the cash desk. I didn’t know it still existed in the modern world, having thought it had gone the way of penny farthings, respecting your elders and white dog turds, but sure enough, there it was. Personally I spend enough time trying to eject unwanted intruders from my nose to snort some hideous looking murder-dust, but it takes all sorts…. 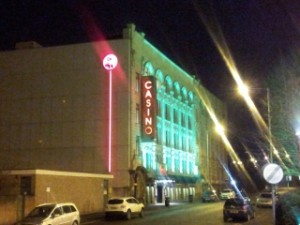