At time of writing, Aspers in MK is the newest casino in the UK, and only the second to be opened under the new casino law (The 2005 Gambling Act, for those interested). And yes, that’s not a typo, it’s taken 8 years (actually 6 since the law was finalised) to get the second of a theoretical 16 casinos opened up.

The key difference to these new casinos is scale, and Aspers certainly has plenty of that. It’s kind of easy and tricky to find at the same time – the building itself is pretty straightforward, it’s a gigantic indoor ski centre called the Xscape, so if you make it into central MK, then you really can’t miss it. Once you find the Xscape, however, the casino is fairly unobtrusively on the right hand side as you face the building, as the photo shows.

Wandering in through the revolving door is an interesting experience too. It’s opaque glass, so as you push through you don’t see anything – and are probably expecting a lobby area – but you pop out into the main casino floor, which seems to stretch back forever. It’s a very large site, and your eyes take a minute to adjust – luckily there’s nothing to bump into (unlike Aspers Northampton) while you are getting your bearings.

If you look at the bank of slots straight ahead, there’s what looks like a speed camera mounted on top, which is a really cunning innovation – it’s a facial recognition system, which checks your face against all the people they have either barred or who have been self excluded – handy in a site with no membership requirement (although they have constant security on the main door too).

The other big deal with these new casinos is that they are allowed a lot more slots – this site has, by my count, 108 slots and about 70 electronic terminals. As you’d expect, the slots are beautiful, shiny and new, with every game you could hope for, including an expensive looking Sex and the City 4 player rig with in-seat speakers, great if you are a fan of the four money and appearance obsessed conspicuous consumption addicted evil caricature hags. I’m not, really, in case you hadn’t guessed.

It’s a busy site, too, with indicators such as 5 ATMs (and 3 voucher redemption machines) on site giving a clue as to how much money they must be taking. There are two bars, a huge sports bar with a wall of screens at the back end (perfect for footie watching, with some great armchairs) and a slightly more upscale bar on the left as you walk in, with a smoking area including outdoor TVs – that can’t be something you see very often. The food option is a tiny restaurant next to the smaller bar, but I reckon they have built the place for gamers rather than diners, and there’s a nice looking snack / Panini etc menu for people playing.

The poker room, another massive affair, is out the back of the site, with tournaments every day except, mysteriously, Friday, and lots of cash games. Talking of cash games, I’m not sure if it’s a good sign or not – probably just a part of their launch strategy – but they give away £2K every Tuesday night at the moment in a prize draw.

It’s a great casino, and one you should definitely check out. It’s a minor pain to get to from the M1 – you’re looking at roundabouts into double figures – but it’s worth the hassle. 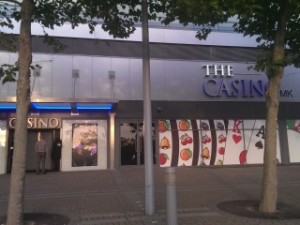