For those of you who aren’t familiar, Thanet is the bottom right hand corner of the UK, or more accurately the top right lumpy corner of the bottom right corner – just look at a map, and stop bothering me. I was once told by a pub bore that it’s actually an island (which would be backed up by the fact that it is generally known as the “Isle of Thanet”) as it’s cut off by a river, and tends to have its own microclimate.

In any case, you’re basically looking at Ramsgate and Margate – this casino was once located in Ramsgate on the front, but now lives in a leisure development which sits on the back of a retail development, at “Westwood Cross”, a few miles back from both towns but easily accessible from either. The retail bit is particularly nice, a bit more classily done than the average behemoth out of town shopping centre, and the casino is actually in the same building as the Mecca bingo – part of the same company, Rank Plc.

Inside, it’s a pretty standard G Casino, on a very large scale. The reception areas has the now familiar wall of board games, only this one has, instead of two of the panels full of games, 38 sets of wireless ear buds, with apparently no explanation as to why they are there. Perhaps it’s that new modern art I hear about.

As usual the slots are right next to the entrance, tucked away on the left, and there’s an extra slots area full of £500 machines, which is under a completely separate licence. The valet service here is ninja like, with a very friendly young lady approaching me within two minutes to offer me a drink and sell me a sarnie – that was all they had on offer at 2pm, as the grill apparently wasn’t on, but the ham and cheese number I ordered was actually tremendous, on a warm baguette.

This place had most of the G classics – the hypnotic bar lit ceiling, the bulkheads in the main ceiling, the electronic roulettes overlooking the gaming floor (this time not looking through etched glass like they have at G New Brighton) and a huuuuge poker room. In fact here the poker room looked like it was getting decked out for a dining function of some sort, so there were a couple of poker tables in the TV area, presumably for cash games.

It’s very much a typical G site, which due to the location is taxi / driveable only for nearly anyone, and judging by the number of people there early in the day, is probably pretty successful. Having said that, given their age profile maybe they were only waiting for the bingo to open next door…. 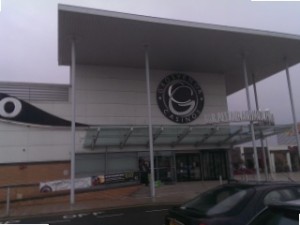