Brand new and shiny as you like - the best spot in Southport ?

The Genting in Southport is one of the latest of the new generation of Genting casinos, having been relocated a short distance into a rather grand shiny new building. On our visit, a week or two after opening, it looked like they were struggling to get tenants, with just a tapas place and the casino in the development, although they were about to be joined by the unfortunately named (given recent publicity) “Hungry Horse” restaurant chain.

It’s as if they don’t actually want you to get into the place in some ways – the car park has no signage at all – we parked on the street nearby and walked in.  Getting through reception is a bit of a drama too, I actually (like a casino geek) clocked it at 11 minutes from arriving at reception to getting to the lifts to the gaming floor, with only two parties of three waiting in front of us. I really do wonder why casinos still insist on the membership system when they no longer legally have to, if I hadn’t been on a spying mission for you readers I’d have given up and headed for the boozer.

Once you’re in you jump into the lift, and to be fair the sight you see on exit is really rather pleasant.  The lifts open up into the large bar area – you can’t see the gaming at all until you move around the corner – so you head for the bar, which has a stage area and lots of comfy booth seating around, as well as plenty of room. The restaurant is also next to the bar, and overlooks the gaming floor, as well as being staffed by the most helpful friendly team you could hope for.

The team was a bit of a feature of our visit – there are millions of them!  Granted it was only a couple of weeks after opening, but we counted at least 40 staff members on duty, and while it was a busy Friday night, you can imagine the levels being cut over time. They were certainly a friendly bunch however.

The gaming consists of 8 tables plus a mid sized poker room – 4 Roulettes, 2 Blackjack, one Three Card Poker and unusually a Mini-Baccarat table.  Minimums were a little unusual, in that the Roulettes were at a relatively expensive 50p and £1, while you could play for a bargain £2 on Blackjack. The machine offer was of the quality you expect in a new site with multi-game IGTs, Gaminators and shiny Sabre electronic roulette terminals, although they also had 4 very, very old single game IGT machines – presumably old favourites of the punters from the old site around the corner (now closed).

It’s a very nice site with some excellent touches including a smoking terrace that overlooks the marine lake and a restaurant terrace with similar views (possibly not recommended in winter, although they have heaters – they’d need to be fusion reactor powered). The new Gentings even have a large clock on the wall, seemingly to show a new way of thinking (with casinos traditionally not showing any timepiece).  There are gripes – a £1.95 fee to use the ATM seems a bit stiff, seeing how they’re going to get all your money anyway, and the ATMs are in a particularly exposed position.

Overall the décor’s lovely as usual with Genting – possibly not quite as spectacular as Derby and Southend, although it’s a small site – so if you find yourself in town, take a look. 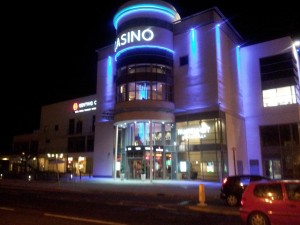