Seaside classic, with a faded splendour

The Rendezvous in Southend, owned by Caesars, is located in the Kursall, which is a German word for “Cure Hall” (Ahem, thank you Wikipedia). It’s a pleasant looking building, with the casino located on the second floor – either go for five flights of stairs or one very slow lift.  No prizes for guessing what Captain Lazy went for.

Once you get to the floor itself, it’s a bit of an odd site to be honest, with the first thing you come across being a soft seating area with loads of sporting memorabilia on the walls, all of which is apparently for sale – evidently operating a casino doesn’t make enough money. There is a handy big screen TV with an even handier pair of posters advertising the sporting events televised during March – that’d have been more helpful if the visit hadn’t been on 8th April, mind.

Moving onto the floor, it’s quite a big site, a bit TARDIS like in that it is a lot bigger than you think at first. The poker room’s off to the left with the schedule delightfully displayed on a messy whiteboard. The main bar is near the entrance too, with an odd sort of stage in front, and what at first looked like a stripper pole, but on closer inspection seemed to be – well – not a stripper pole. Shame.

The slots are all rather ancient, mostly single game IGT boxes, with some even older Alfastreet electronic roulette on tap. They do have an unusual innovation on their roulette tables, however, with the wheel split up into several coloured sections, so the beginner can simply place a bet on the blue part rather than getting confused by the numbers. Nice touch.

The restaurant is over to the right, with a pleasant view over Southend, and lovely it looked too.  We visited earlier in the day, however, so only the bar snack menu was available. I would point out, however, that the team in Southend were as friendly and helpful as anywhere you could ask for, probably a good thing for them given the strength of their opposition.

You generally get the impression that the Rendezvous, is a bit tired and run down, and is stuffed with an unbelievable quantity of promotional posters, leaflets and general crap lying about. If you want a friendly team more than plush facilities, however, it might just be your spot. 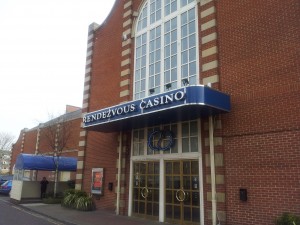