One of the top three most attractive casinos in the UK, with a great view of a crazy pier

Ah, Southend …. My expectation was a kind of sub-Skegness, full of gangsters, flat pints and Eastenders accents without even the compensatory excitement of Blackpool rock.  In actual fact I reckon I might have been a bit harsh, it’s actually a pretty pleasant place, and if it’s a shiny casino you’re after, you’re in exactly the right place.

The Genting is located right on the seafront, not far from the ridiculously long pier – so long you need to catch a train to get to the end (that’s not a joke – there is an actual train). Personally speaking, there’d have to be some sort of show involving Scarlett Johannsen in a compromising position at the end to get me to hoof it a mile or so out to sea, but the owners obviously have a cunning plan of some sort.

The site itself is quite isolated, although they have on street parking right out front and plenty of it (although one wonders how busy it gets in the peak of the summer). You start to get a feeling of how special the site is as you enter, and once inside it becomes clear that this is no ordinary casino. The décor is nothing less than spectacular, it must have been refurbished very recently, and the effort shows.  The ceiling is especially awesome, and the overall feeling is of class – similar to the Genting Derby, it has an echo of the Aria in Las Vegas.

It’s another long thin affair, with the large poker room on the left and the rest of the casino over to the right. There’s a bar right in front of you at the entrance (handy for thirsty poker players) and just on the right, with a separate entrance, is an area full of slots and Electronic Roulettes, which it turns out is actually a second licence in the same building – a sneaky way to get extra slots beyond the legal 20 limit.

Through the centre of the building is the main gaming floor complete with shiny new slots (newer than the ones in the small extra licence, anyway) moving down to a very impressive stage area and main bar, with lots of very comfy looking seating around it.

Magnificent site as it is, there are still some issues. The whole southern wall is a huge plate glass window, which while it gives great views over the sea (and Pierzilla) also makes the place subject to glare – if you’re playing one of the millions of electronic roulette terminals, you can only see the gaming floor in silhouette. There’s also some nasty glare from the lights on the ERs themselves, but these are minor problems in the context of one of the best looking casinos in the UK. 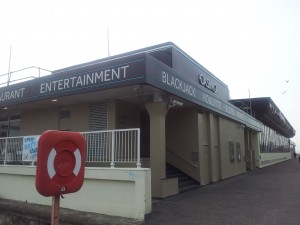