Classic casino of many names

Many years ago, back in the mid 1990’s, what was then the Rank Organisation (now the Rank Group) had squadrons of casinos all over the country, in a right royal mess of varied brands. They had Tiberius Casinos, Sergeant Yorke’s Casinos, and more than a couple of Soames’ Casinos. With a fair amount of common sense, they decided to rebrand the whole herd into “Grosvenor Casinos” – some of which are still called that today. This site was one of the ones that was rebranded from Soames to, in this case, “Grosvenor George Street” (being the street address), but evidently there was a general unwillingness on the part of the locals to adopt the new name, and 15-20 years later, the owners have finally relented and gone back to calling it Soames, with a snazzy new (relatively speaking) sign.

The George St location is walloped right in the middle of Manchester’s fantastic Chinatown, about 50 yards from their arch and surrounded by a multitude of tasty food options.
On entering, I showed my card and for what seems like about the tenth time in the last few weeks, had to show ID and get another new card and picture taken – you’d think they would have sorted group membership out by now. There was also what felt like yet another dodgy looking part handwritten posterboard advertising all the random crap Grosvenor were trying to offload on the poor locals in return for their loyalty points – pretty poor show in my opinion.

Next step was through the control door into the upstairs area, with all the slots and absolutely millions of roulette terminals – evidently the Chinese locals love a roulette machine. The slots are all up to date, and of course have the Fort Knox jackpot – I particularly remember this since I won it (calm down, only the £50 level) ! I also acquired a groupie, in the form of a sweet old Chinese lady, who was cheering me on as I played through the Cleopatra bonus for another £100-odd, not a bad start. This upstairs bit is pleasant enough, and features some quite odd 3D effect wallpaper, a bit of a mindbender.

Downstairs you’ll find the main gaming floor, full of action already at 10pm on the traditional Chinese busy night of Monday – I imagine by 2 am it would be mental in there. It was almost all Chinese business, in fact I did a bit of a comedy double take when I saw another Caucasian face on a punter, eventually – while I was beating up a downstairs electronic roulette machine out of another £100. My terminal was right in front of a roulette table so I was able to watch the serious action, along with a dealer who looked and sounded so bored, it was almost an artform – and I’m pretty much a connoisseur of boredom by now.

My favourite part of the casino was the ceiling – regular readers will know I love a truly ancient ceiling, and like the Golden Nugget in London this place sported a magnificently old golden lattice type effect. That’s 80s style.

That did it for me, so I took my pile of cash winnings and disappeared into the night. I stopped off at a 24 hour Spar to get some sustenance, only to find it had a bouncer. On a Monday night. Yikes! 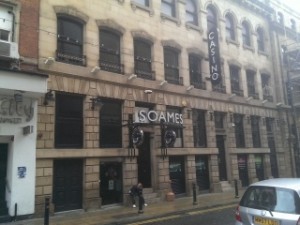