There are two Napoleons casinos in Sheffield, by all accounts the proprietors (the Allen family) being local to the area. The Owlerton unit is positioned right next door to the Owlerton dog track, in fact just up the road from where Sheffield Wednesday play their football, at Hillsborough. Out front they have a pleasant enough water feature, and a drop off and pick up point right in front – presumably for taxi pickups, as nobody could be lazy enough not to walk from the car park, which is huge and within about 10 metres of the door.

Once you get into the site – they don’t bother with asking for ID any more unless you are a big player (beyond about £1,500 – no danger for me) it’s a pretty typical Napoleons experience. It’s pretty old fashioned, with dark timber, staff and management in bow ties, and a feeling of quiet concentration about the place. At least this one doesn’t seem to sell snuff, like the Bradford unit. All that’s not to say it’s snooty at all – when my Electronic Roulette terminal froze up, they could not have been more helpful in sorting it out, proper professionals.

Unusually for a Napoleons site, they had some brand new slots in play, five IGT multigame boxes which were in good enough condition to be straight out of the wrapper. Luckily enough I also managed to pinch a few quid out of one of them, so all was well, and they’ve got the place set up so that the TITO vouchers you take out of a slot are accepted in the ER, which makes life much easier – so I won on the ER as well!

As usual the site has a poker room and a nice looking restaurant, in which presumably you either digest the evening’s greyhound entertainment after watching the races, or have a bite and a drink before the dog races start, to ponder the form. As always, there’s the eternal question of what to do if you see your favoured dog take a dump immediately before the race – is the weight lost going to make it run faster, or does the higher centre of gravity post-defecation make it harder to get around the corners?  Decisions, decisions …. 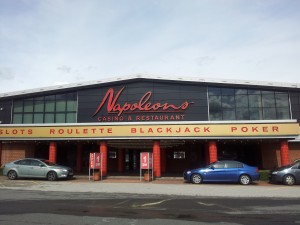