The Sam Tai Casino can be found effectively stuck to the side of Blackpool Football Club, oddly enough – you’d probably want to think twice before you ventured in for a peaceful half hour on a home match day. It’s only recently been rebranded from the old “Paris” theme, and once you get inside you can still see plenty of echoes of the old theme, with murals aplenty of Parisian scenes. The Eiffel Tower, Arc de Triomphe and plenty of other standard landmarks are in evidence.

The site has an interesting history as well, with the operators originally taking over from the Grosvenor’s old site on Station Road, near South Pier, before being destroyed in a fire at the neighbouring Grand hotel. It ceased trading for several years, before reincarnating, phoenix style, at its current location, and has of course since changed names again. You’d have to say the interior in general is a little old fashioned, with the staff dressed in black and white – but if that’s what pickles your onions, then give them a spin. Parking is under the building, with plenty of free (night time) on-street parking nearby. They’ve had a few problems in the not too-distant past, with their old GM getting arrested and convicted for theft, but that’s all over now.

Once you join up and head up the stairs to the main floor, you arrive at the bar and slots. The restaurant is right in front of you as well, and is in fact pretty good – when the current owners first took over they cut down from the previous fabulous A La Carte offer to something much more basic, but now they’ve improved the offer a little, so it’s pretty similar to the average casino fare. One bloody annoying touch – their PA system broadcasts into the restaurant area, so while you’re gazing into your loved ones eyes – or avoiding eye contact with the ugly lads I was dining with – you are regaled by the receptionist calling in the poker players and so on. Not great for atmosphere.

The gaming floor has the usual big three games, with a couple of new experimental games too. I won’t bother going into the details, new games generally don’t last long, but there’s at least some variety. There is a good sized poker offer, and periodically club push the poker offer heavily, leading to some great value. 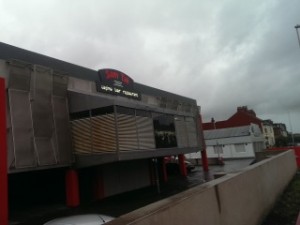