The oldest looking casino in town, but still a handy central location and a bit of charm

The Grosvenor is the only site in Reading that could be considered town centre, and sits just off the end of the Oracle shopping centre. In my youth I used to live locally, and always remember a particularly low bit of signage at the Oracle car park entrance, seemingly designed to ambush unwary late night drinkers. That was until one day I noticed there was what looked like a pork scratching with some unmistakably human hair attached to the bottom corner, the one which juts over the pavement – clearly it had claimed its first victim.

Anyway, the Grosvenor is a split level affair, with an electronic only area on the ground floor with stairs up to the tables and restaurant. My first contact wasn’t very promising – evidently they’d got a dealer covering the reception break, and he didn’t know how to put through a new member. Ten minutes later we got sorted – I guess they probably hooked all the best staff out for the new G casino in town, leaving Johnny-no-stars at the old site. One day you’re a shiny new toy, the next just a smelly old hat.

The ground floor electronic area has a mixture of new kit, with lovely shiny IGTs on the Fort Know, and a couple of older games, including my personal favourite, Invaders from the Planet Moolah. The music on the bonus feature of this game is, frankly, the best slot machine music ever produced (with that of Rich Little Piggies close behind), but I wouldn’t recommend chasing it to hear it unless you like the game as much as I do – gets expensive.

Upstairs the main floor is pretty modestly sized, with a nice restaurant area that overlooks the gaming. They’ve clearly either had some work on site recently or are about to have some, judging by the ladders and scaffolding kicking around. There’s also a sneaky optical illusion on your way out of the top floor – a structural column, if you’re standing in the exact wrong spot, obscures your view of where you came in, so if you’re as dim as me you stand there for 10 seconds like a fart in a colander, not sure what to do. Hopefully no-one noticed.

It’s a pretty typical town centre site, and it will be interesting to see how it gets along now that Rank have put another of their own  sites in as competition. In theory they’ll be able to run the show between them and capitalise on their position. 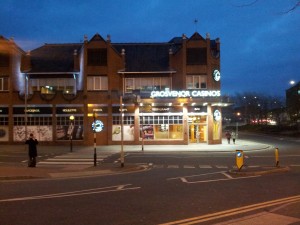