Grim on the outside, lovely on the inside

This ex-Gala Casino was bought out and renamed Rainbow and sits on the A19, which for the benefit of non-locals is the main trunk road that divides Middlesbrough and Stockton, and leads up to Tyneside. Teesside Park itself is a retail park just off this road, with a leisure park as part of it, although as you move further and further into the park, the desolation increases exponentially. Past the (still operating) cinema, you get to a closed nightclub and a closed bingo flanking the casino, and although they have put some signs up representing the casino on the closed building, nobody is fooled. If this was the wild west, there’d be tumbleweed floating past the front door, but being the north east, there’s the local equivalent – Greggs pastie wrappers. Brrr.

This site also glories in the biggest, most unnecessary casino car park in the country, but at least you know you’ll find a space. The irony is that once you get inside, it’s actually pretty pleasant, and appears to have been recently refurbished. I parked myself at the modern selection of slots, and gazed over the tables in the central part of the casino – although I was the only punter in the place, given that they had just opened (at four pm).

This area is a tough old part of the UK, with the major industries locally being a huge steelworks at nearby Redcar, and a massive chemical works you can almost see from the casino. I do remember a combination of strange circumstances once leading to my going to a leaving do in nearby Middlesbrough, which inevitably ended up in a highly sketchy strip club. A conversation with a guy next to me at the bar was illuminating – he said, “I don’t know why I’m paying a fiver a go to get teased here when I can go round the corner and get the real thing for £10”. Delightful.

Anyway, this site used to get a great poker game, but with the advent of the G Casino Stockton not far away I think they’re struggling to get it rolling again. They certainly have some unusual promotions – I saw signs for “Roulotto” where everyone picks 15 numbers and anyone who gets them all crossed off within 40 spins wins the pot, which was standing at over a grand. Mind, 40 spins on a roulette table …. Must take aaaaages ….

It’s really not a bad site, and in fact is the opposite of somewhere like Genting Brighton, in that it looks rough on the outside but is tidy enough inside, sparkly ceilings and all. 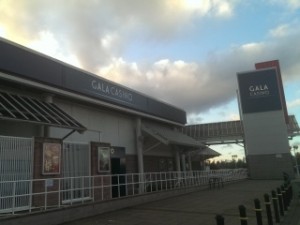