The Rainbow (ex Gala) in Cardiff is bang in the centre of town, and is located right next to (and shares a car park with) a rather splendid shopping centre. Mind, I say rather splendid on the basis that it has lots of swanky shops, but fantastically it also sports a Spud-U-Like fast food outlet – I thought they were made up for comedy purposes. Mind, the Welsh aren’t shy of a comedy fast food name, after all they were the creators of the unbeatably named “AbraKebabra” chain. Incidentally, getting into the car park involves going up a long, long corkscrew ramp, long enough to make your brain hurt. I didn’t feel quite right until later when I’d come all the way back down again, and had unwound my head!

Anyway, once you’ve got through the ground floor reception area and navigated either the lift or the slightly confusing spiral staircase, you’re on the main gaming floor. It’s a good size, although a bit murky, and the first thing that struck me was how hot it is. Maybe the aircon was busted, or maybe it just struggles to cope with the first warm day of the year, but it was pretty toasty in there.

The kit is pretty ancient in terms of slots, although the ER is up to date – they also had some odd hybrid ER terminals in slot machine style cabinets, confusingly with “Bet” buttons that did nothing at all. As usual for an ex-Gala, they had done a great job with signage showing which wheel is which for ER players. There are a total of 10 tables including a mini Punto Banco table, not open when I popped in.

The Bar is a bit miserable, and the restaurant very small indeed, although you can see why people wouldn’t automatically associate the place with the food offer – given the location you’d think they would get a bit of daytime trade (and there were a few in around 1.30pm when I visited) but when I asked to order some scoff I was told the chefs don’t start until 2.30. No wonder they have a food promotion of two for one for all meals, every day until 10pm, essentially saying food is half price for anyone (who has friends). I was also delighted to see evidence of another Ice bar – a strip in the bar which freezes, in theory to keep your drink cold. These are in my opinion the ultimate example of an idea that seems sensible but doesn’t work – anything from an evil discoloration of the ice to some wag writing rude messages in the ice with a warm coin to the fact that your drink has a tendency to skate off the bar suggests to me that they’re not very practical.

Outside of the F&B offer, the place was nice enough. A bit of a poker offer is available around the corner, and an actual real live glitterball near the stairs amused me too. I reckon the place might be summed up for me in one point – I was having a dart at Lucky Larry’s Lobstermania, only to find that the “repeat bet” button didn’t work. Of all the things not to have kept well maintained, you’d think the button that lets people spend money faster might have been near the top of the list. 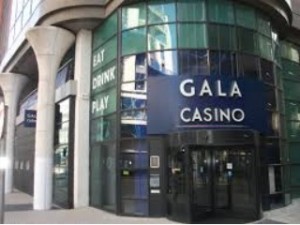