Pleasant independent spot on the outskirts of Brum

The Rainbow in Birmingham is an independent site actually just down the road from the Edgbaston Genting (aka the Midland Wheel), slightly closer to the city. Both sites benefit in one way from the distance out of the centre – it’s a bit too far away for the real drunkards to stumble into the casino – although there is a Spearmint Rhino right around the corner !

From the outside the Rainbow doesn’t look much to be honest (and it also has its own car park), but once you get inside it’s really rather pleasant. It looks to have been recently refurbished, and once through reception (where you don’t have to register if you don’t want to) you’re into the main floor, and straight into the slots area. Unusually, they have exclusively IGT slots, and exclusively shiny new multigame boxes. Personally I prefer this – the Gaminators I find a bit less interesting, particularly as on the same day as I visited the Rainbow, I got stung out of £20 in the Gala Birmimgham, 20 spins at £1 with not a single tickle.

Anyway, the machines are in good order, although one I played had very stiff buttons, and the girl who was evidently there to keep everything clean literally could not have looked less interested if she had tried, flicking a duster in a bit of a stupor. To be honest, some of the other staff weren’t a lot better, but then there was a Champion’s League game on TV. Certainly the valet service was excellent.

The electronic roulette was the brand new “Unity 2” type, with some rather strange staking options – 25p, £1.25, £2.50, £5 and £25 were your chip options, no way to play £1 per chip, which seems a bit odd, but the gear was in good nick. Annoyingly the video playback of the wheel was not clear enough to watch the ball, perhaps the cleaning girl was supposed to polish the lens. The tables were the usual game mix, with a couple of brand new table games thrown in, and looked respectably busy for a Tuesday night.

There are echoes of old fashioned-ness about the place – the cashiers are behind glass, for example – but with a decent restaurant upstairs as you enter and a really rather attractive décor, it’s definitely an option for a little puntette, and heaven knows we could do with as many independent casinos in the UK as possible. 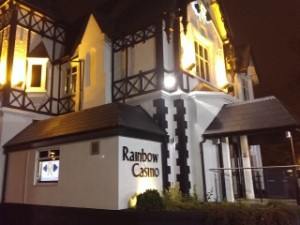