One of the nicest casinos in the country, a must if you should find yourself in Scarborough.

To say this is the nicest casino in Scarborough might, to the unfamiliar, sound like saying it’s the shiniest turd in the pan, or the most talented person to be let go in the first round of the X-Factor, but you’d be oh so wrong. The Opera House is one of the most attractive casinos in the UK, with a really rather fetching design, and on a pretty grand scale. It has without doubt the most unnecessarily huge reception area – they don’t ask you to be a member, by the way – and you wander in expecting the worst but open the doors to see quite a picture.

It’s a good sized space with the tables in the middle, the slots over on the far side and the electronic roulette around the walls. There are two bars – a huge one in front of the entrance, and a smaller one in a slightly separate area (which I think doubles up as the poker area and private hire space). By all accounts the whole place gets absolutely heaving on a weekend, as it’s one of the nicer places in Scarborough, and probably most towns at that.

The restaurant is in a bit of an odd location, up a slightly walled in spiral staircase – I reckon it’s not very busy, partly because people don’t like walking up stairs to something they can’t see. That might be the only thing wrong with the design – apart from the wonky floor near the disabled ramp – which clearly has had a lot of thought and money poured in.

The front reception has a bookies shop pretty much built into the site, which I think is owned by the same people, and there’s a car park out the back. In the daytime they get a pretty mixed clientele – I was lucky enough to get a common-or-garden nutter sat next to me, who was talking to absolutely nobody about the cricket, presumably before he went outside to chase buses. On the other side I had a nice lady who seemed to be watching me with one eye, and her slot machine with the other, quite an off-putting trick in all honesty.

Minor concerns these, however, and once you add in a bit of northern value it gets even better. £2.50 a pint was on offer part of the week, along with a sign saying, bizarrely, that there were live acts every bank holiday Saturday. At least you have plenty of notice to avoid them (and avoid the Genting Salford debacle situation).

It really is an unexpected jewel, and well worth visiting. 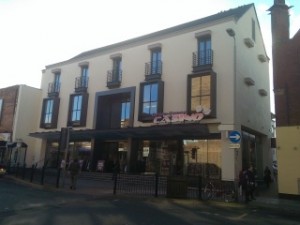