You can’t miss the Alea in Nottingham, it’s on one of the main streets off the ring road, in the, “Royal Zone” – although I can’t say I saw too many members of Liz’s family. The exterior signage is very prominent, and they are opposite an extraordinary car park. To simpletons like myself, it seems quite odd to enter a car park at street level, descend 3 levels, then walk out at street level again, but then I’m easily confused – turns out it’s on quite a steep but disguised hill.

Inside, it’s all very grand – perhaps they built it with royalty in mind – with a huge reception, which involves another level change, up a flight of stairs (or lift) to the main floor. On the floor itself, you’ll find yourself in rather a grandly designed space, with some funky metal-ish curtains around some awesome rocking comfy chairs – or at least they’re awesome until you try to get out of them. The bar area is very comfortable, and plenty of space too.

In common with most of the LCI (London Clubs International) sites it’s beautifully fitted out, with all kinds of interior decorators’ wet dreams to be seen – if you’re not sure what I mean, check the wallpaper in the function room upstairs.  From a distance it looks like a standard repeating pattern, up close it becomes clear it’s actually silhouettes of naked women. Now, far be it from me to tell a multi-billion dollar company how to run their business (LCI are owned by Caesar’s International) but I might have been inclined to buy a bit less £500 per roll wallpaper and invest the savings into research as to how casinos tend to work in the UK.

Again in common with many LCI UK sites, the place is huge, and they must be paying a vast fortune in rent, given that by all accounts they could fit the amount of play they have into something much smaller. The slots offer is the usual mixture, found near the entrances, and there’s a large poker area, which must be a bit of a struggle given the presence of “From Dusk til Dawn”, a specialist poker operation, not far away.

Upstairs are conferencing facilities, including the wallpaper as described. The management are clearly trying to develop this side of the business – they might as well, since it doesn’t appear feasible that they’ll ever have need to pack the place with gaming – so it will be interesting to see how they progress. Bringing casinos into the mainstream a little can only help them to thrive, so one can only wish them good luck.

The other notable addition is a Marco Pierre White Steakhouse. Now personally I can never understand the obsession with celebrity dining – it’s not as if the miserable frizz haired bastard cooks every dish, unless he has a teleportation device  – but it seems to be extremely successful, and once again any way of bringing more newbies into casinos makes sense. They’ve been quite clever with the entrances too, so that if casinos aren’t your thing, you don’t have to go anywhere near the gaming floor to dine.  However, if you’re a little bit curious about it after your meal, they’ll sort you out a demo game. 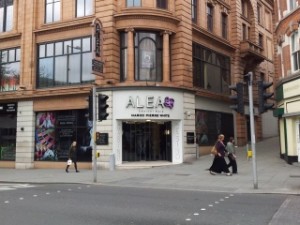