Lovely spot with a touch of class

The Napoleons Casino in Hull looks, not surprisingly, much like their other offerings around the North, with this one being in something of a stand alone building just away from the town centre. It’s a good spot for anyone who likes bridges, being next to a rather fetching little number and not far of course from the monstrous Humber Bridge – poo-poo northerners all you like, but you can’t fail to be impressed by it up close.

Anyway, the casino itself is a pleasant enough place, with two bars more or less next to each other rather unusually, and many of the older slots in the space in between them, including what might be the oldest slot machine in the UK (apart from some of the decrepit boxes in the Genting Wirral) called Chu Han Chess God. I presume it pays out in shillings. Look a little harder and you’ll find some modern IGT multigame boxes off the gaming floor, which was just getting started when I visited at, from memory, about 6pm.

There’s a biggish poker room in the corner, which in years gone by I once nailed for a split of a large tournament prize, and the usual upmarket restaurant offer, all adding up to make a rather comfortable environment, not harmed by the magnificent decision to offer draught Peroni, king of lagers.

There were squadrons of management about when I arrived, perhaps on some sort of shift changeover, although as they only open at two (four on Saturdays, oddly) this seems a bit unlikely. Perhaps this explained why the dealer on the roulette table kept saying “Place your bets” and “No more bets” really loudly, even though I was the only punter within ten yards of him, and I was playing the slots – still, you can’t fault his enthusiasm.

If you are headed for Hull for any reason, this casino is definitely a relaxing place to be. It does seem inequitable in the grand scheme of things that Hull seems to have a terrible traffic problem around about rush hour, leading to a 30 minute queue to get into the place. With no disrespect, it’s not exactly Disneyland, so the desperation to get into the town feels a bit odd. I also had a bad experience with the place once going to watch my team play football there. In typical lazy fashion, I hadn’t bothered to research where the ground was, and figured I’d just head for the floodlights. About 3 miles outside if the town I saw the stadium, and parked up in a retail park nearby, thinking I had 15 minutes to spare and would walk over there. I then found out to my horror that it wasn’t the stadium at all, but some kind of transport hub building that looked like a footie stadium, and I was stuck 3 miles from the ground as they kicked off. And we lost. I said I’d never go back there, but for you fine readers, I bit the bullet… 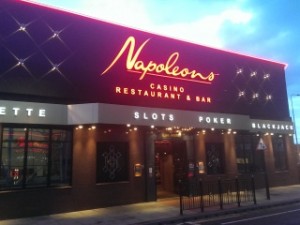