The Sportsman is situated a very short distance from Marble Arch with unsurprisingly a bit of a sporting theme – there are sport related posters all over the place, with some great old boxing shots among them.

It’s owned by Caesar’s Entertainment – yes, the guys out in Vegas. You wouldn’t necessarily know it from the fitout though, it’s quite muted in nature and pretty tasteful, including the least vomit inducing carpet you’ll see in a casino. Maybe they should put that on the website.

It’s a pricey spot, mind, with £10 Blackjack the lowest available even in the daytime, so maybe not the best place for a casual punt.  They have a full ration of slots too, including some in cabinets you don’t see too often in the UK, the lower “slant top” designs.  The kit itself is mostly pretty old, with a couple of presumably trial machines from a brand called “Diversity”.  Presumably that’s a separate company, not the dance act that won X Factor, unless they really are multi-talented.

Much of the Sportsman is currently in the process of a refurb, so we’ll take a look again once it’s back to looking its best and get back to you 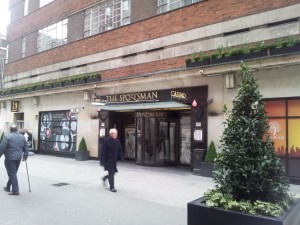