Ah, the Playboy … conjuring up appetising images of a 98 year old man perving over pneumatic young girls, a magazine that’s only ever purchased “for the articles” and the essence of the seventies. Does the new Caesars site in London move on from this concept ? Well, kind of.

The first thing to say is that the London site isn’t just a casino, they have a very upscale bar and a type of nightclub on site as well. The bar is called Salvatore’s, and was put together by an Italian gent who claims royalty and film stars among his previous clientele. The place itself is genuinely amazing, a really nice atmosphere and a cocktail list as long as Mr Tickle’s arm. The most expensive costs a cheeky £5,500 (all as an attempt to get into the Guinness book of World Records – doubt anyone’s ever bought one) but one of the house specialities is called a Spicy 50, made from vanilla vodka, chilli powder and one or two other ingredients.  I tried one and have to say it was awesome, going from sweet to sour and then spicy.  You don’t get much for a pretty stiff price, mind, but it’s well worth trying one.  I did wonder what it would cost to get a pint’s worth, but I reckon it would run over £100 so maybe not.

The Baroque club-ish room is another odd one. It’s a dark room with plenty of atmosphere, and a house band augmented by some higher profile acts. Not really my cup of tea, but it was busy enough on a Thursday night with desperately trendy types. My initial reaction to seeing this amount of dogsstooth jackets and flat caps would be to reach for the nearest flamethrower, but then I’m not really a part of the London scene.  The atmosphere fit the bill, though, and by all accounts buying a table isn’t crazy pricey – in the region of £60 a head with food included.

The casino is up the stairs, and is staffed mainly by the legendary / outrageously sexist (delete as applicable) Playboy bunnies. In deeply uncomfortable looking uniforms complete with cottontail, jacked up racks and occasional outbreaks of bunny ears, they look very fetching and generally are a very friendly bunch. The floor itself doesn’t seem to be hugely busy, but with a lowest Blackjack minimum of £25 that’s no surprise really, with their target market it may not take many players to make the whole thing pay. The restaurant – by Judy Joo (Whoooooooo ?????) is just off the floor, and I speak from experience when I say it’s really, really good.  We had three courses (only paid for two, but the kitchen was unexpectedly slammed so they sent out a free interim halibut dish – stupendous) and all were outstanding.

It’s quite an experience to visit, so why not get yourself down there.  The membership deal seems to be a little unclear and has changed since opening – it may change again – but Salvatore’s is certainly open to all, and you can figure out the state of play with the rest when you get there.  Generally speaking in casinos if you have money to spend you’ll get on to the gaming floor, so pack a wad whether you plan to torch it or not and you’ll be able to get a look at the action. Careful how close you get to the girls though – some of them could have an eye out at 6 feet …. 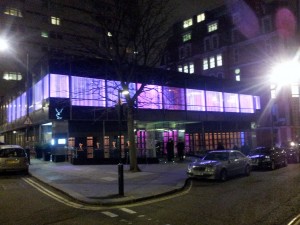