The Barracuda Casino, incidentally one of the hardest to spell in the world (honourable mention : Les Ambassadeurs) is located just off Portman Square in London, actually addressed at 1, Baker Street.  From the outside, it looks particularly stylish, with a smart new façade which you wouldn’t even necessarily associate with a casino – subtle signage not necessarily being associated with casinos of course. It used to be part of the Gala stable, but has now been absorbed by Grosvenor Casinos – hopefully they’ve put an end to the hideous Gala name badges within, since they looked horribly out of place in a venue this classy.

It’s classy indeed, possibly bordering a little on retro. Green tables evoke an image somewhere between classic and old fashioned, although it obviously works for the clientele, who generally appear to be rich enough to light cigars using £50 notes.  The sort of place where by reputation six figure sums change hands – I’ll leave you to guess whose hands they generally end up in.

There is a private room opposite the main gaming floor which has  just been refurbished, and a spectacular spot it is too, all in cool whites and all a bit too classy for me, being use to peeling walls and chips that have mysterious black lumps attached to them. I felt a bit outclassed looking at the restaurant menu too, which was fatter than Gary Glitter’s toy catalogues – small wonder that they have 7 different chefs, to cover each international aspect of the menu.

The slot offer was surprisingly old fashioned, with several old single game IGT machines to be seen around the place, although there was a fair amount of play.

Overall, I’m not sure whether they’d usually let riff raff like myself visit on a routine basis – I happen to know one of the management, so was able to pass through the oik filter by permission. 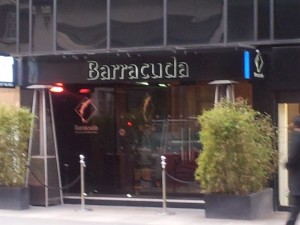