Bizarre independent site with echoes of the sixties

This place is – well – unique. It’s not quite the casino that time forgot, it’s not quite as mad as a box of frogs, but I guarantee you won’t find a place quite like it. Not quite sure where to start, but I’ll kick off with the fact that they have a blackjack shuffling procedure that I have literally never seen before, despite having visited pretty much every casino in the UK and plenty elsewhere in the world. More on that later.

Les Croupiers used to be in the very centre of Cardiff, and by all accounts used to make untold fortunes, mostly from the Chinese market. Something relating to the pedestrianisation of the area led them to relocating, and now they’re on a retail park not far from the centre, in fact on the same plot as the footie stadium, leading to some interesting Saturday afternoons in the casino I imagine, even more so now while they were in the premier league. Their immediate neighbours are a toy shop and a “Mamas and Papas” store – all a bit odd. It’s a threshold door policy, so you just wander in through the door, and in many ways, into the past.

It’s been a while since I saw dealers in tuxedos, but they’re present and correct here, and they have 4 different types of Electronic Roulette, including “Rapid Roulette”, a type that I thought had died out with Myspace and leg warmers, as it takes a dealer to spin the ball. It’s even more extraordinary than that, however, as none of the ER pays out in notes or tickets, they have attendants to take care of it for the players. Not very efficient, and presumably done in the name of customer service.

Going back to those procedures, on Blackjack when they get to the cutting card they just stop and shuffle immediately, mid hand. It’s so strange my mind didn’t process it at first, and I just stared like a drooling moron – all the cards and bets stay exactly where they are, and off they go. It kind of makes sense in a way – the idea is evidently to stop the player leaving in between shoes – but it looks very odd. Similarly they spread all winning bets on roulette all over the layout, no idea why for this one, as it must slow the game down something terrible. Finally, they have £2 chips on the £2 BJ table – not all that weird – but £4 chips on other card tables.

Anyway, idiosyncracies aside, it’s clearly aimed at the Chinese market and seems to do well. All the signage is in Chinese as well as English, and a telltale sign is that the poker room (as well as the restaurant) is upstairs but the mah-jong area is on the main floor. The slots are away at the back of the casino – unusually so really, with many slots players being very casual – and is made up of old machines, naturally with all coin payouts.

It’s hard to argue with their approach, they seem to have the Chinese market in Cardiff locked up, so if you don’t believe me, take a look yourself. I guarantee if you’ve been to a few casinos this one is an eye-opener. 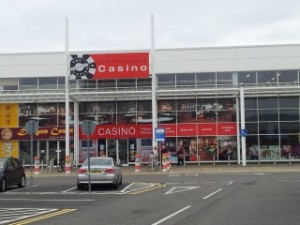