Slightly old fashioned looking but now Grosvenor-ised, and handy for the footie stadium

Sunderland used to have a single Gala casino, in a first floor location in the dodgiest area imaginable – and it looked like it hadn’t had a new carpet or wallpaper for about a century. These days, however, it’s relocated into a shiny leisure development, or at least it was shiny when they first moved in. It’s also now been bought out by Grosvenor, and converted over to be a part of the big beast.

The complex is right on the river Wear – there’s a Chinese restaurant next door with undeniably spectacular views over the river valley – and there’s a cinema, Nando’s and a couple of other options, including the cleanest Frankie and Benny’s I’ve ever seen. I’ve been in there a couple of times and the staff never stop polishing.

Anyway, the interior décor will be familiar to anyone who’s been to Gala Leicester, Bristol and so on. It’s a long thin place, this one, with the cash desk and toilets at the far end. As I walked in the computer was spannered, so the reception team just wrote my name down – good thing I’m not a self excluded problem gambler, I guess – and I walked through the huge, hideous “G” logo entrance.

The bar is one of those that used to be an Ice bar, but they don’t seem to still have the strip of ice along it – crap idea anyway – and it’s next to the nicely turned out restaurant. Something’s gone on in the bar lounge area, it looks like they have taken out a load of electronic roulette terminals judging by the blanking plates in the seating area.

They have a decent sized poker area too, as well as a small dice table – don’t see that very often – and a big wheel. There’s also the most random huge almost–circular desk in the middle of the floor just inside the entrance, absolutely no idea what for, answers on a postcard please.

It’s a pleasant enough site, and being the only casino in town I suppose they don’t need to try that hard. There’s a small stage area, and once, back in the mists of time, your writer may or may not have graced this stage, karaokeing away, brutally murdering Queen’s Crazy Little Thing Called Love. Hopefully the CCTV tapes of this crime against music have been erased 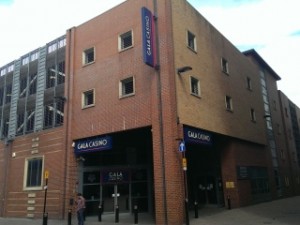