Situated right in the centre of Nottingham’s ring road, the Gala is a huge site, with a very handy car park on top (which they will sort out payment for if you bring your ticket in – not a bad option since I ran up £10.50 in three hours). Slightly ironically the ring road is called Maid Marian Way – obviously a nod to the region’s Robin Hood roots, but there’s not much robbing from the rich and giving to the poor involved here – more the other way around.

Anyway, inside it’s a pleasant spot, interestingly with a dedicated slots area with a separate entrance. Closer inspection reveals that they actually have two casino licences in the same building, a cunning way to get around the maximum of 20 slots per licence. The slots themselves are a mix of old and new, with some Gaminators but also some tired old single game IGT machines – and this is another Gala site where the slots aren’t converted to TITO (Ticket In Ticket Out) yet – so you have to take your payouts in coin. Makes it a right drama to switch machines of course, and if you play for a while you’ll find your fingers start to go a kind of silvery colour, not particularly nice. Unless you’re a Cyberman of course, in which case you wouldn’t notice.

The rest of the casino is pretty standard, with a pleasant looking restaurant area featuring a quiet hidey-hole just behind the bar, recommended for a peaceful bite. They offer poker but with the poker behemoth that is From Dusk til Dawn in the town, one feels their heart isn’t really in it. They also seem to do well out of party nights, with a dedicated area in the casino for comedy shows, bands etc.

Seeing management walk around in white shirts with a black bow tie was a bit of a throwback, but one feels that their competition in Nottingham probably go for a more mixed party crowd so they’re trying to aim at the higher end of the market perhaps. Before they worry about the state of the staff they might want to look at the state of the carpet – I swear if you held it up to the light you could see through it, and that’s in the places where it isn’t 50% tape rather than actual fibre. No doubt they have a refurb lined up, or perhaps everything’s on hold for the Grosvenor takeover. 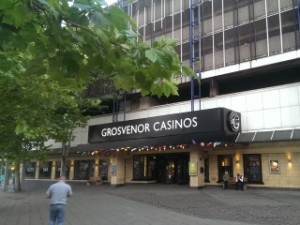