The reddest casino in the UK

The Leeds Grosvenor is situated a short walk from the City Centre, right next to a Wetherspoon’s pub called “Stick or Twist”. Those cheeky scamps at Wetherspoons, who clearly haven’t actually played Blackjack in a real casino – we’ve tended to go with “Card” or “Stand” for – ooh – about the last 50 years.

Anyway, it’s an unusual layout, in that the building contains two licences – this is so that the operator can have an extra ration of 20 slot machines. They’re housed in a separate room downstairs, with the membership control point covering both gaming areas. Up the stairs you go to the main gaming area.

The first impression that you get as you enter the casino is – well – mind bending! This is without question the reddest casino I’ve ever been into. The ceiling’s red, the carpet’s red, the uniforms are red, and the table layouts? Well, actually they’re blue. Only, joking, they’re red too, making you feel that your eyesight’s not quite working properly. At least you get a respite if you want to smoke, since you have to go all the way down the stairs and back out of the building. Keeps those with the filthy habit a bit fitter I suppose.

Anyway, the bar’s on your right as you enter, with the slots on your left. There’s even a rare sighting of one of my favourite slots, Invaders from the Planet Moolah, in the mix. Altogether now …. “Moooo …. dum-dum dum-dum dum-dum-dum-dum” … oh, haven’t played that one ? Never mind then. I even saw some local oik pick up 100 free spins, and showing a typical intelligence, played directly after him, at which point I might as well have set fire to my £40.

There’s a poker room too, and a smallish restaurant. The tables were very quiet on my visit on a Thursday, and you have to wonder about the future for a site like this with a Large licence coming and two competitors in town (although one of them is now more of an ally since the Grosvenor / Gala takeover). To quote a line from the movie, “Armageddon”, “nothing will survive, not even bacteria”. Well, actually maybe it might not be that bad, but a less violent paint job might be a good start towards making this place a bit more homely looking … 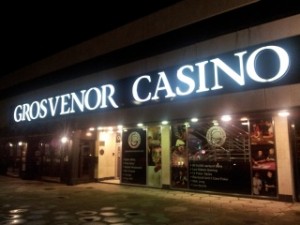