Ah, nautical Portsmouth. So nautical, that one seafaring name wasn’t enough for this leisure / retail development. No, Gun Wharf wasn’t good enough, and nor was Gun Quays, it had to be GunWharf Quays. Ahoy there, salty seamen, etc.

The casino is pretty hard to find on foot within the complex, so you are better off parking up in the enormous car park and taking the lift up to the casino. It’s genuinely a monster car park though, so find the casino lift while you’re still driving around – it’s on the left, not long after you enter the car park, from memory. Also, bear in mind when you leave that there aren’t many pay stations because you can pay on exit with your card. One more point- the casino refund parking, but only after 6pm. I left at 6.50pm, so I saved 5 minutes worth of cost. Oh, and remember where you parked your car – we don’t want a repeat of the Rendezvous Brighton incident.

This isn’t that old a site, but even since opening it’s been converted into a new shiny G casino (from what it used to be – a Grosvenor site). It’s a very well done conversion too, with the usual dark atmosphere and a lovely torpedo bar (that’s what they call it apparently – it isn’t actually much use for sinking Nazi battleships, but quite good for overpriced beer). The decor is very nice – a bit of shiny gold, some really cool aircraft and car schematics near the gents toilets, and a few other nice touches, and being the shiny new kid on the block it even has an actual showbar to the rear. This is no temporary converted back room, it’s a well fitted out affair, and given that the prices advertised were £25 per head, I’m guessing it was for real acts, not dodgy tribute bands or karaoke howlers. There’s a smallish poker room next door to the showbar too – I hope it’s properly soundproofed, I can almost hear the moaning poker players in my head.

There are some other odd touches, like what appear to be slush machines behind the bar, but I can’t complain about the service – the valets were exceptional on the brand spanking new slot machines. I also have to say the machines were in a very good mood – I absolutely skinned them. From a £15 buy in to a £320 cash out via six – SIX ! – shots at the Fort Knox progressive. The idea of £12K as a Platinum prize was pretty appealing, but 4 bronze and a couple of £100 silvers did me quite nicely. I reckon it’s the secret to enjoying your gambling – assume you’ll lose, and when you get a great winning day to get a chunk of your losses back, enjoy it while it lasts.

The cheeky winning tickle certainly helped my mood, but regardless it’s a great conversion and the class casino spot in Portsmouth. 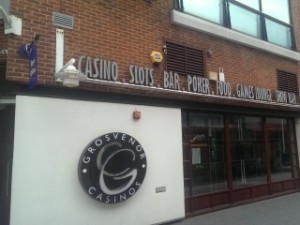