Standard G with nearby competition. And a ship.

The G Casino Plymouth is more or less directly opposite its competition (the Genting) and, frankly, doesn’t look to appetising given its immediate neighbours are a Wetherspoons pub, a Varsity, and sundry other student type boozers, apparently designed for pre-loading of alcohol in preparation for atrocious banter, vomiting and questionable late night decisions.

In fact on my visit it didn’t suffer from any symptoms of the nearby establishments, although it had been invaded – if that’s not a slightly inappropriate word – by the contents of a shipful of German tourists, rather oddly.  Where they had come from and why they were there appeared to be a mystery to everyone, but they certainly gummed up reception – in fact when I first arrived I gave up, and headed for the Genting first, coming back later when it had calmed down a bit. Actually, speaking of ships, there’s a mysterious great big one stuck on the front of the casino, not sure why, I think it was an original feature of the building. What probably wasn’t an original feature were the hordes of smokers stood outside the casino – evidently thee’s no smoking terrace.

Inside it’s a walk up the stairs job onto the main floor.  This site was originally just a plain old Grosvenor casino, but was upgraded to a G a few years back. It’s all shiny and fairly new looking, with some familiar features like the torpedo shaped (nautical touch, thankyouverymuch) bar with the sparkly ceiling lights. It was pretty busy for a midweek night, although there was a particularly sad looking promotional big wheel in one corner, with all the prizes looking to be worth less than a tenner.  Just behind this were a half dozen 75% deflated balloons, which did look rather depressing and, if I were a bit more intelligent, might have led me to ponder on the meaningless of life and certainty of a sad, lonely, unremembered death.  Instead, me being me, I had a cheeseburger.

The G Plymouth has a nice feel about it, and an exceptionally friendly manager. There is a poker room – although it’s a bit hidden away on the left as you enter the site – and the food offer looked up to the normal standards of a G operation. Most pleasingly of all it had the mandatory grumpy wizened Chinese geezer at reception, ranting at the team member there about his delayed taxi, as if the receptionist had deliberately arranged the taxi to be delayed to make life miserable for him as an individual. It’s little touches like these that make a casino feel like a casino …. 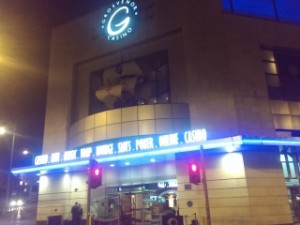