The big boy of Brum's central casinos, and a basement treasure

The Grosvenor in Birmingham is located right on Broad Street, the liveliest spot in the city, and flanked by all kinds of boozing and troughing spots. In fact, the area gets pretty juicy late on a weekend, to the extent that I’ve seen bouncers on nearby fast food outlets – a punch up over the chicken nuggets being quite common, apparently. No need to worry as far as the casino’s concerned though, they have their own security when they need them and it’s bad for business to have too many jolly boys on the floor, louting it up for everyone else.

The casino is part of the “Fiveways” leisure complex, named glamorously after a nearby roundabout, and has tons of parking around the back, with a corridor through to the back of reception, the front being directly off Broad Street. The site is in the basement, but try and resist using the lift down to the gaming floor as the way the view unfolds as you walk down the spiral staircase is pretty special.

Once you are on the floor it’s business as usual, with the very comfortable slots area on your left, stuffed as you would expect with the latest kit, as well as a truly minging bit of signage on top of one of the carousels. They have their regular feature of electronic roulette overlooking the gaming floor, and some amazingly uncomfortable chairs to go with them – it’s like sitting on a tea tray.

The rest of the site has a small mah-jong / poker area tucked off in one corner, and a very compact restaurant area in the opposite corner next to the very swish bar, all three of which look pretty comfortable.

It’s a really nice atmosphere to play in – being in the basement is quite unusual in UK casinos, and it adds an edge to proceedings – and something must be working right, as I believe it’s the most profitable casino in the group outside London. The toilets are also worth visiting – I suppose they tend to be mandatory on a long visit – they’re the cleanest I’ve ever seen, you could probably eat your dinner in them. If you were a strange casino toilet food fetishist. Or possibly German. 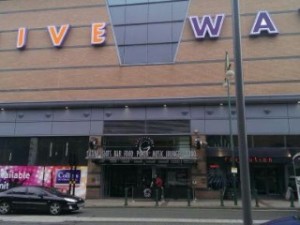