Tiny high street site with no tables and apparently no service

A bit of an oddity, this one, and in fact I don’t think it’s called Grosvenor at all, although it’s run by the same bunch of people. The signage outside says “E-Casino”, in an amusingly futuristic typeface given that it’s on a long terraced building which is home to more than a couple of charity shops, not particularly space age in my opinion. I think Grosvenor used to operate something similar in Liverpool too, which evidently can’t have been that successful as it’s closed now.

It’s quite pleasant on entry, with a small bar right there as you walk in, and you turn right to see the gaming. As you might expect it is about electronic gaming, with all the slots you would expect including a good ration of bookie type games, and plenty of electronic roulette terminals. There’s even a pool table, which was getting some action in the middle of the day, and a live poker table, which wasn’t.

The staffing is very thin, again no surprise given the lack of tables, and they don’t seem to be too desperate to boost trade. I was pretty surprised not to be approached by anyone serving drinks in the 40 minutes or so I was in the building, although one girl did clear all the empty glasses and peanut packets around me, without perhaps wondering if I might be a bit on the thirsty side – perhaps they are making so much money they don’t need to try too hard.

They are unique as far as I know in that they don’t seem to have the Grosvenor Play Points loyalty scheme, and although it’s fair to say that a bit like Great Yarmouth it’s not really on the way to anywhere, it’s actually worth checking out if only to see what a future might be like without gaming tables. With about 10 staff in total I bet they have a crap staff party too. 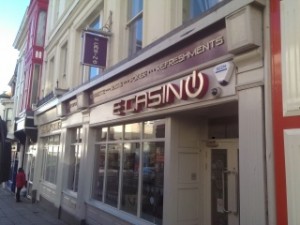