Great big box in a leisure development, next to the cinema

The Southampton entry in the Grosvenor stable is located in a Leisureworld development, the same concept as the Genting in Coventry, oddly enough, and it still feels a bit creepy to me as an idea. This one isn’t done any favours by some shot up looking signage for the other attractions, and a closed unit and boarded up pub right next to the casino. The units that are in operation also have a bit of a flavour to them – one is a nightclub called “Disco” – presumably ironically. The drinks promotions tell a story too, with 2-4-1 cocktails and a bargain price for 2 pint pitchers. Now in my world there’s only one reason for a two pint pitcher – nobody’s going to buy one to share, so essentially it’s clearly only a case of buying a bigger drink for convenience, presumably for Southampton’s equivalent of trainee Geordie Shore fodder. Maybe I’m just too old.

Anyway, the casino is at the front of the development, with a huge Ikea opposite on the main road. I assume they have the same Ikea parking problems as all the rest of them, since there are dire warnings to enter your car registration on a touchpad in casino reception to avoid a fine if you’re in their car park.

That tedium dealt with, it’s through a slightly odd passageway – decorated with some nice but unidentifiable prints – to the floor. You exit into all the slots and electronic roulettes, in a pretty nice area. Slots are of course very up to date with some super high def IGT slots to play with. I did have one odd experience on the slots, mind – I was playing on the end of a bank of 4 identical machines, and some geezer wandered over and started playing the one right next to me. One would think people would show the same courtesy as gents do at urinals, but no, he sat and crowded me for no good reason. If it was the toilets there’d be the instant suspicion of a willy watcher – there’s nothing worse ….

The main gaming floor is in the centre, with a really nice looking raised bar off to the left, restaurant and cash desk in the corners, and a poker area on the back wall. It is, in truth, a great big box but fairly well disguised. The most striking thing is the light fittings in the casino. All down one wall are the most bizarre light fittings that look like nothing quite so much as real life lightsabres. Having said that, the main light fittings in the middle of the floor are actually amazing, looking just like big old fireworks in mid-burst.

Electrical geekery out of the way, it’s a very pleasant site. I even had the pleasure of a mad old chinese geezer next to me on Electronic Roulette, talking to himself and hitting the screen – every casino should have one. One more thing you should keep an eye out for – this site has the biggest pit desk I have ever seen in a casino (the desk the pit boss uses for his paperwork). From one angle I genuinely couldn’t tell if it was a pit desk or a piano! 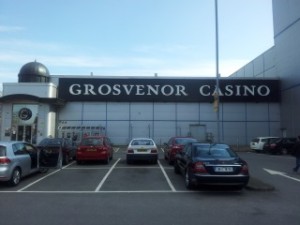