The Grosvenor in Salford is about five minutes from the Genting, although the traffic can make it quite a bit longer – we got stuck in a mystery jam at about 11pm on a Saturday. It’s handily located on a little fast food park with a KFC and sundry other unhealthy options, and seems to be referred to as “Riverside”, although I never saw the river from the casino.

Walking in, the overwhelming impression is … Brown. The whole place seems to be a mixture of beige, brown, rust and various other earthy tones, I’m not quite sure why, but it does give the place an odd atmosphere. The ceiling is very high, which actually also gives the place the feeling of being a little bit empty, despite the fact that there were 30-odd people gaming.

The layout has the main gaming pit in the centre, with everything else raised around it. On your right as you enter is the slot area, with all new gear as you would expect, and it overlooks the gaming floor, always a nice touch. If you walk around the raised walkway on the left, you pass the restaurant area and end up in a tidy looking bar. The restaurant area appears to be a dual purpose affair, with a retractable wall to separate the poker room – I imagine, judging by the fact that here are no poker tournaments on a weekend, that the space is for eating at weekends and poker the rest of the time. Certainly there seemed to be an act just packing up as we arrived, a relief after our Salford Genting experience. There’s also a huge sparkly curtain at one end of the gaming floor that looked a bit stagey, maybe it was just a decoy.

The main gaming floor offered the usual, including the rather snazzy Riverboat Roulette, which appeared to be roulette for idiots, with sections of the wheel coloured in and matched betting areas on the layout – all good I guess for introducing new players. We were also amused to see everyone on the floor wearing the same stripey uniform except one guy, who was all in black. Had he been naughty ? Was he too cool for school ? Who knows. Perhaps he was a descendant of Johnny Cash and he had lobbied the HR department to be allowed to honour his family tradition.

You get an idea of how ropey Salford is as a whole when you see the cash desk. Not only is it glassed in, but the window looks to be bulletproof glass and in fact the desk as a whole looks pretty grenade proof, evidently a reaction to the area in general and the fact that they had a Samurai sword-based robbery here some years ago, not pleasant for anyone involved.

The only other point of note was to highlight something everyone likes to see, the original “Pirate Piss”. This was delivered in some style by a gent who had clearly had an adult beverage or two, and was in the toilet facilities micturating while keeping one eye closed to concentrate, and reaching up with one arm against the wall for balance. Always a top effort, well played sir ! 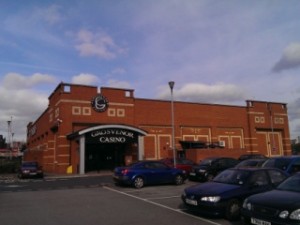