Now converted form the old Gala into a Grosvenor, this was one of the first large sites on the edge of a UK city centre

The Grosvenor in Leeds is located on Kirkstall Road which heads out to the west, in the general direction of Bradford, and mysteriously sits directly opposite their competitor, Napoleons. It’s named Westgate to avoid any confusion with the original Grosvenor out at Merrion Way – this one was one of the taken over Gala sites. It was, when we visited, just in the process of being converted into a Grosvenor after the takeover, so the signage all currently looks a bit temporary.

By all accounts it was one of the first “destination” casinos, designed to be big enough and with enough car parking that a non-central location isn’t too much of a problem. It seems to be something of a success, and typically has a very busy cardroom business – poker players are renowned for traveling to find a game, so being a bit out of town isn’t a drama. Despite the fact that it’s not that far as the crow flies from the centre of Leeds, it’d be a pretty awkward walk, with a motorway to cross, and the Grosvenor casino quite a bit closer, so their large car park is an asset.

It’s a classic sort of two level design, with the upstairs being dedicated to the restaurant and the aforementioned poker room, with what looked like 15 or more tables available for play.

The main level is pretty pleasant, with a genuine gaming “pit”, a few steps below the level of the walkway around it. You can take a wander around on one level, with a bar and comfy seats from which you can watch the gaming, or head down into the business area to do battle.

At the entrance to the main gaming pit is where they’ve put the slots, all quite congested although that does make for quite a comfortable playing experience. They have electronic roulette on both levels of the ground floor too, with some shiny new Inspired Sabre terminals for those who like a roulette game that vibrates on touch. Feel free to make up your own punchlines for that !

They’ve done a really nice job on the design, and although it’s maybe ready for a refurb, it’s looking pretty good. Past experience also suggests their poker room is a friendly spot to have a dart. Apart from a bunch of supporting columns that get in the way of sightlines – but without them a dusty flattening would be on the cards – it’s something of an oldie but a goodie. 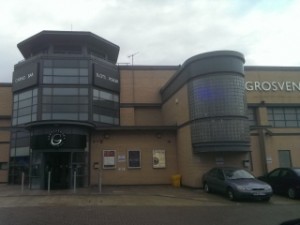