This is another huge site right in the middle of the city, which Rank / Grosvenor took over from Gala. As soon as you get into reception you see that it’s actually two licences in the same building, so that they can have another 20 slot machines which are in a separate room off the reception area.

The reception is run on the membership method, which is a right pain in such a busy site. It was actually ok when I arrived, but as I left the queue had backed up out of the door, forcing some people to stand out in the delightful Scottish drizzle while they waited. Think I’d have headed to the boozer instead. Anyway, once you’re through the barrier, you’re onto the floor. The entry level is all very pleasant, with a good sized bar, a handful of tables and Electronic terminals and the restaurant which faces onto the street. There’s also a huge – and I mean huge – screen for viewing sport, with plenty of seating about. In the centre of the floor is a great big spiral staircase down to where it all happens, the main basement level.

Down here there’s a huge room, with all the tables, another great bar and, frankly, a whole load of wasted space. I’m not sure what they planned on having to fill the area – perhaps a basketball court or a mid sized supermarket – but there’s masses of circulation space.  There are also some wonderful comfy booths to sit in and have a drink, although one of them is just marooned on its own, very strange.

At least it’s a massively busy site, so the space gets filled with wandering locals.  They’re friendly enough – too friendly in some cases, I had the standard slot spectator come and sit next to me to try to engage me in conversation. I’m not totally antisocial, but after 20 seconds it became clear she had no money and was on the way to trying to ponce some of mine, so I made my excuses and left to wander the floor. One thing that stood out was that the staff were all immaculately turned out, which always gives a place the air of quality.

It’s a major casino site, the Grosvenor Merchant City, and I reckon makes as much money as pretty much any casino outside London.  My visit was on a Thursday – I imagine on a weekend it must be absolutely heavingly busy. 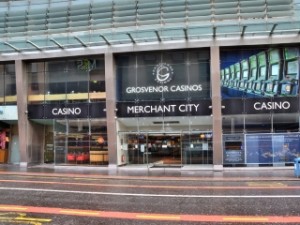